The transfer market will open on January 4th 2021 and there was some speculation as to who, if at all, will Valencia sign. There was a meeting reported between Javi Gracia and Murthy this week. Talks of signing Capoue resurfaced, and Villareal appear to be in contention as well. Diego Liete of Porto and Ferro of Benfica have been linked to the club to reinforce the central defenders. With Atalanta not keen on using Piccini and with the team already short-handed, it also appears that he could be on his way back to Valencia. Finally, as Diego Costa has been released from his contract at Atletico Madrid and with there being clauses deterring him from signing with teams in domestic teams in European spots, Valencia was mentioned as a possible (unlikely) destination.

Granada suffered a 2-0 away defeat at the hands Real Madrid. The game was pretty one-sided as Real Madrid dominated possession and chances. Both goals were scored in the second half. The first was a headed goal by Casemiro 10 minutes into the half, and was individual goal by Benzema in stoppage time.

Valencia lost 0-1 at home against Sevilla. With the game being fairly even and Valencia squandering their good chances in front of goal, Sevilla took their chance late in the second half and grabbed the winner with a shot from Suso from the edge of the box

Granada currently sit 7th in the league with 21 points from 14 games and Valencia are 16th with 15 points from 15 games.

Racic will certainly miss this game due to having a case of vertigo during training. He attempted to participate but simply couldn't finish training.

Lato will also miss this game due to testing positive for COVID a while back.

Guillamon, and Cillissen are still in recovery from their injury. Paulista also suffered an injury in the game against Sevilla and will likely miss several games including this one.

Kang In should be available for selection after missing last game with discomfort. Gameiro has also been recovered from injury. 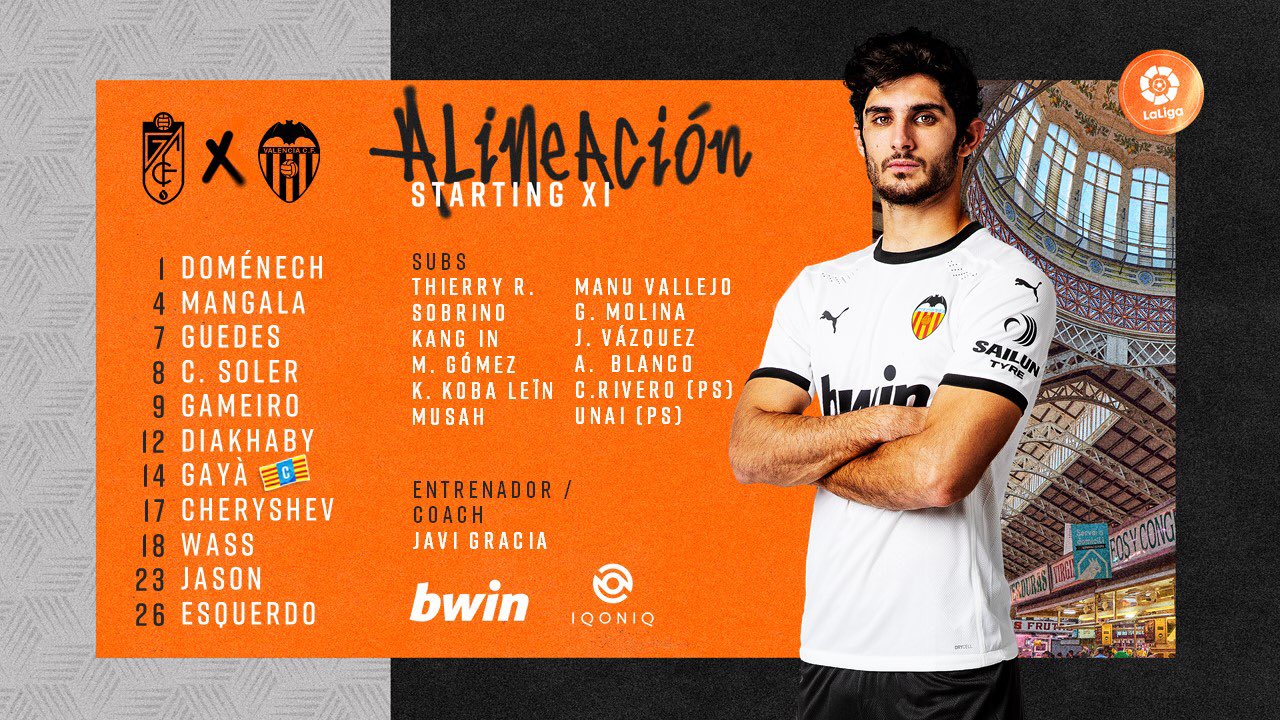 FIRST HALF
9' - Yellow card shown to Jason for dissent against the referee
14' - Goal for Granada. 1-0. Counter attack from Granada ended in a shot from Kennedy at the edge of the penalty area and across the box, beating Jaume at the far post.
15' - Goal overturned by VAR as Foulquier fouled Jason with an arm to the face in the build-up. Yellow card shown to Foulquier
25' - A poor header back by Gonalons sets up Gameiro for a run at goal, although at a tight angle. He tests the keeper and forces a save with the rebound falling onto the head of Guedes, who hits the target but the keeper is quick to react and save it.
33' - Yellow card shown to Wass for a heavy challenge on Puertas
35' - Goal for Valencia. 0-1! A good tackle by Esquerdo wins possession for Valencia. Guedes receives the ball, pokes it to Cheryshev out wide, who then puts in a delightful cross to the far post for Gameiro to blast through from close range. VAR checks the initial challenge from Esquerdo on Suarez and confirms that it's not a foul.
44' - With Gonalons injured and Granada temporarily down to 10-men, Valencia start a counter-attack led by Jason. He has Cheryshev, Guedes and Gameiro in support yet opts to go the distance himself and takes the shot, it is high and wide. Wrong decision there.
45' - Three minutes of time added by the referee for stoppages
45+2' - Goal for Granada. 1-1. Kenedy beats Jaume from the free kick as his shot deflects off Gameiro and into the goal. The deflection confused Jaume and rooted him to the spot.
SECOND HALF
48' - Yellow card shown to Mangala for a rough challenge on Yangel Herrera
66' - First change for Valencia, Vallejo on for Gameiro
68' - First change for Granada. Jorge Molina replaces Roberto Soldado
70' - Red card shown to Jason after picking up a second yellow card for a dangerous tackle on Domingos Duarte. Valencia down to 10 men.
72' - Yellow card shown to Puertas for dragging down Vallejo
73' - Straight red card shown to Guedes for bad-mouthing the referee. Valencia down to 9 men
74' - Double substitution for Granada. Quini on for Foulquier and Soro on for Puertas
76' - Second substitution for Valencia. Musah replaces Cheryshev
77' - Red card shown to Domingos Duarte for a last-man challenge on Manu Vallejo to stop him from going through on goal
86' - Final change for Valencia. Koba Lein replaces Esquerdo who is struggling to continue playing
88' - Goal for Granada. Jorge Molina with a glancing header to meet Soro's cross and beat Jaume.
89' - Final change for Granada. Luis Suarez is replaced by Jesus Vallejo
90' - Five minutes added on by the referee for stoppages
90+4' - Yellow card shown to Gonalons for an arm to the face on Soler
FULL-TIME
Full-time stats. 24-16 shots. 5-6 shots on target. 53-47% possession. 75-72% pass accuracy
Next game for Valencia will be on the 4th of January 2021 at Mestalla against Cadiz.
Posted by Amunt.Valencia at 3:36 AM
Email ThisBlogThis!Share to TwitterShare to FacebookShare to Pinterest
Labels: La Liga, match preview, match report, news, results
Newer Post Older Post Home