Jose Luis Zarargosi resigned from the Valencia board of directors earlier this week. He had notably made a statement when the transfer market was still open that Valencia would, without a doubt, make a signing during the window. In the weeks to follow, Javi Gracia did not get any signings and it is clear that he remains at the club only to avoid his 3 million euro penalty. Seeing the situation as is prompted the director to resign. The official statement of the club though painted a different picture. It said that the director took responsibility for the failure of his mission in achieving social peace within the club. It should be said that Zaragosi was reportedly one of those at the board of directors who stood against the decision to fire Alemany.

Javier Tebas, the president of La Liga, gave a speech this week at the Universidad CEU Cardenal Herrera higher education facility. The event revolved around the operations of La Liga and its plans for the future. During the event, the situation of Valencia was discussed. Tebas gave a lot of credit to Peter Lim saying:

"It’s very difficult to evaluate how a club is run without knowing details. When Lim bought Valencia CF I remember that there were 25,000 people who turned out at the stadium to thank him. It seems as if we have forgotten that this man came along and avoided Valencia CF going into receivership -or even disappearing. Peter Lim has my full respect, as without being a Valencian he took this step. After that, there have been things he has got right, and also mistakes that have been made.” [Link]

It's funny how his position completely turned around when he was one of those that initially opposed the purchase of Valencia CF by Peter Lim. Further research by one article shows that Peter Lim was instrumental in the opening of the first La Liga office in Singapore - a crucial part of La Liga's expansion plans in the South-East Asian scene. In addition, Peter Lim had reportedly invited Tebas to the Singapore F1 Grand Prix.

The most recent news surrounding Valencia is the closing of a deal between Valencia and Atletico Madrid for the purchase of Kondogiba. As reported by Cadena SER, the deal is a 15-20 million euro purchase deal with Valencia reserving 15% of rights of a future sale. The deal hasn't been confirmed by the club yet but most outlets are reporting this as a done deal.

Valencia come into this game on the back of 2-1 away loss to Elche. Valencia was on the back-foot for the entirety of the first half and allowed Getafe to take a 2-0 to the half-time break. Valencia came into the game in the second half and, with the introduction of Kang In Lee, pulled one back through a Toni Lato goal assisted by Kang In.

Getafe suffered a 0-1 home loss when they hosted Granada in their last fixture. The difference between a sides was a penalty in the 3 minute of injury time in the first half which was converted by Granada. Getafe had double the shots but Granada had double the shots on target that game.

Valencia currently sit at 16th with 7 points from 7 games, 2 points above the relegation spots. Meanwhile Getafe are 8 with 10 points from 6 games.

With Kondogbia having not trained with the team for the past while, and there being rumors of his departure, it is no surprise if he is off the squad list for the game.

It was reported earlier in the week that Diakhaby would miss both the Getafe and Real Madrid games due to the injury he picked up against Elche.  Esquerdo will also miss this game through another injury.

The good news is that Maxi Gomez has recovered and trained with the team and is available for selection.

Apparently, Javi Gracia has been experimenting with alternatives in tactics. There were talks of a 4-3-3 or a 4-2-3-1, although it remains to be seen what the effect of Kondogbia's departure is on those plans. Additionally, Jason has been tested as a right-back during the training sessions. 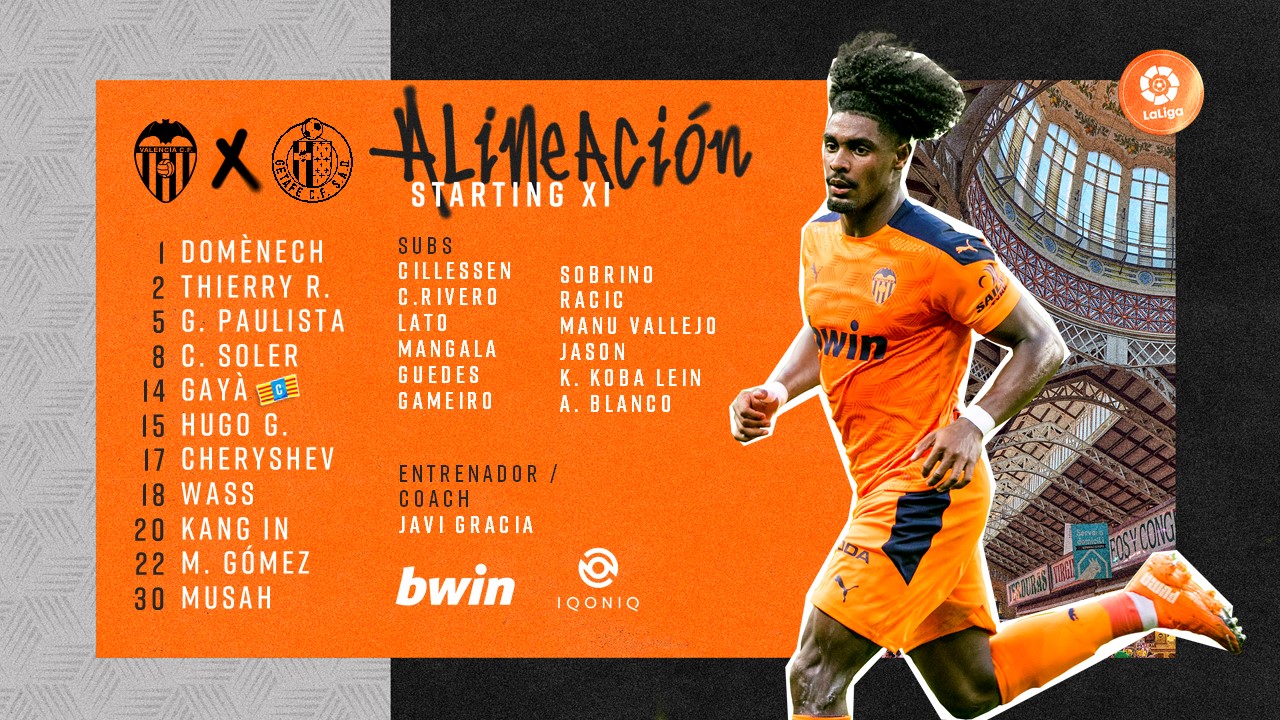