Three games from the end of the season. With some rivals having challenging games this matchday, Valencia should look to finally capitalize on this opportunity after wasting so many earlier in the season.

The rumor mill in Valencia this week mostly continued their speculation on who the new coach would be. There was also discussion on Guillamon and how strange it was that he stopped featuring in the team under Voro despite the coach giving all but one (Correia) of the other players some game time. Maybe this will change this game, who knows.

Leganes played out a 0-0 away draw against Eibar in their previous La Liga fixture. It was a pretty even game where there was one shot on target between both teams and it went to Eibar.

Valencia managed to secure their first win under Voro in a home game against Real Valladolid which finished 2-1. The team's first goal came in the first half after a great team play to win the ball back in the opposition half and a series of quick passes that ended in a squared ball for Maxi Gomez to finish. Valladolid would equalize a couple of minutes after the half-time restart, with a deflected cross into the penalty box being controlled by Victor Garcia before he quickly turned away from Diakhaby and beat Cillissen. Kang In Lee would take all 3 points for Valencia with fantastic shot from the edge of the penalty area.

The game earlier in the season between these two teams at Mestalla ended 1-1. Dani Parejo's first-half penalty goal was cancelled out by Leganes in the same half. A fortunate deflection off a Leganes player had fell into the path of Oscar Rodriguez in the penalty box where he managed to beat Cillissen at the near post.

Leganes are currently fighting relegation at second to last place in the league with 29 points. Valencia are in 8th position, 3 points away from Getafe and the Europa League places.

More rotations from Voro, as Domenech starts over Cillissen, Costa starts over Guerrero and, both Kondogbia and Coquelin are in the same lineup. Coquelin has played on the right-side of midfield before but this could very well also be an experimental change in formation. 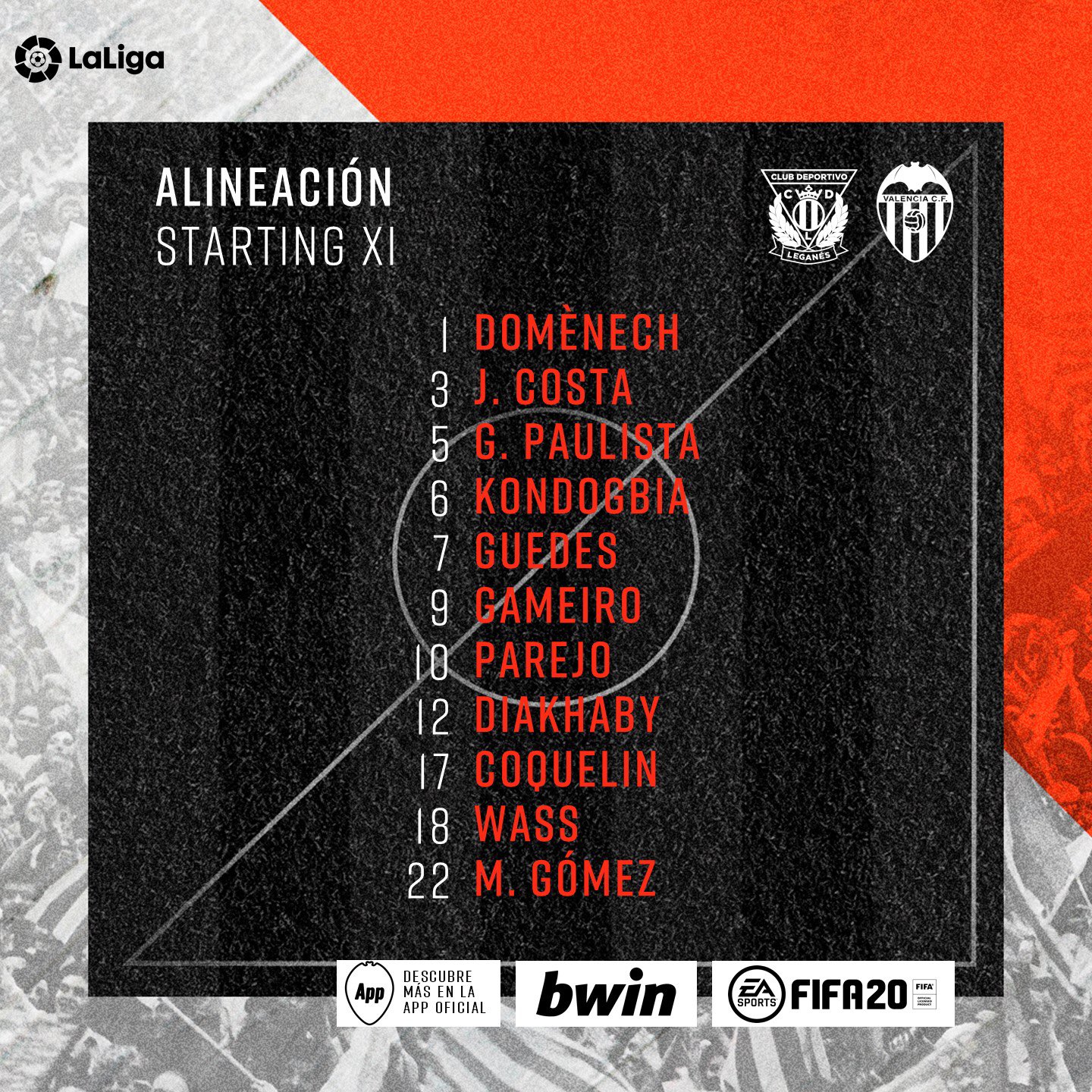 5' - It looks like the formation for Valencia is still a 4-4-2 with Coquelin playing on the right flank.
7' - Guedes find himself unmarked in the opposition half and strikes at goal from distance, hitting the target and rattling the cross bar. It's good to see a diversification of the types of efforts on goal.
8' - Yellow card shown to Daniel Wass for a late challenge on Jonathan Silva.
15' - Penalty awarded to Leganes after Kondogbia's trailing hand made contact contact with the ball as it bounced off the head of the Leganes player.
17' - Goal for Leganes. 1-0. Ruben Perez scores from the penalty, just rolling it into the net as Jaume dives the wrong way.
23' - First substitution for Leganes. The injured Kevin Rodrigues is replaced by Bryan Gil.
26' - Free kick is well delivered by Parejo into the opposition penalty area and onto the head of Diakhaby. He nods it back across the face of goal, the keeper gets a touch, there is a bit of pinball between them and the Valencia players before the ball is finally cleared.
45' - Three minutes of injury time added by the referee.

Not that the half the Valencia would have wanted. Despite having the majority of possession in the half, the team still finds themselves behind on goals as well as total shots for that matter.

Valencia would cause some worry for Legans in the opening 10 minutes as Guedes struck a shot from distance that hit the cross bar. That was the closest that Valencia got to scoring.

At around the 15 minute mark, Valencia gifted the opposition a penalty after Kondogbia handled the ball. That was the only shot on target for Leganes and the goal that separates the two teams in this half. Valencia would not look like they were going to score for the remainder of the half.

With Coquelin occupying the right flank for this game, most of the attacks went through Guedes on the left. This made Valencia very predictable and easy to defend for Leganes. As soon as Guedes so much as touches the ball he gets taken out by his marker and the play shuts down.

Valencia has overall played very lethargic as the ball movement is very slow. This further adds to the predictability of the team and nullifies danger as Leganes defenders have plenty of time to get back and reorganize.

Voro's substitutions in the second half have usually had a positive impact on the team. Changes are definitely needed based on the performance of this half.

45' - First change for Valencia. Kondogbia is replaced by Ferran Torres. Coquelin moves to a central position as a result of this change.
46' - Diakhaby plays a ball over the defense to Ferran Torres who manages to beat the keeper, however he was in an offside position. The goal is ruled out.
52' - Yellow card shown Jonathan Silva for handling and kick Ferran Torres in an attempt to stop his run. VAR reviews the decision and calls the referee's attention to the challenge again. The yellow card is replaced with a straight red and Leganes is down to 10 men. Replay shows that he had made contact with Ferran's calf with his studs up.
56' - Parejo picks out Jaume Costa in the penalty box who then manages to get a shot on target but it's hit directly at the keeper. Easy save.
57 ' - Another VAR check for a handball by Tarin in the penalty box. It is a clear handling of the ball and a deserved penalty. Leganes falling apart over the last 5 minutes. Parejo steps up to take it.
59' - The penalty is saved. Cuellar guesses correctly and smothers Parejo's shot.
61' - Second change for Leganes. Roque Mesa replaces Guerrero. A defensive change as Leganes is left with no striker on the field.
63' - Jaume Costa plays a fantastic cross into the box and Ferran Torres gets on the end of it. The header is over the cross bar though. That needs to hit the target at least.
64' - Double substitution for Valencia. Cheryshev replaces Jaume Costa. Florenzi replaces Wass.
69' - Yellow card shown to Roque Mesa for forcefully stopping the run of Guedes. Free kick in a good position for Valencia.
70' - Parejo hits the target from the free kick, curling it towards the far post and forcing a save from the keeper.
73' - Another change in personnel for Valencia. Paulista off, Kang In on. Interesting to see how the players lineup with this change.
78' - Cheryshev gets past his defender and plays a cross to the opposite flank where Florenzi sends the ball across the face of goal. Gameiro slides in to get a touch but it is just out of reach. All it needed was a touch and it would've been a goal.
79' - Yellow card shown to Aitual Ruibal for a tackle from behind on Diakhaby. Red card shown to one of the Leganes staff for dissent against the referee.
85' - Double change for Leganes. Siovas and Gill are replaced by Recio and Aviles. Valencia's final change is Sobrino for Gameiro.
90' - Seven minutes added by the referee for injuries and stoppages.
90+2' - Yellow card shown to Awaziem for time wasting.
90+3' - Yellow card shown to Recio for a scuffle with Parejo.

Far from the level required for the Champions League or the Europa League for that matter. The result today is the best indicator of that and pretty much seals Valencia's fate outside of the two European competitions.

After a poor first half, Valencia was given the upper hand for almost the entirety of the second half as Jonathan Silva was shown a red card, leaving Leganes with 10 men.

Further after, Valencia would be given a penalty would be awarded to Valencia for a Leganes a handball. Parejo could not convert the effort to a goal with the keeper guessing the right way. That was Parejo's first miss in his last 6 penalties.

On top of all that, many Leganes players were yellow carded and had to play cautiously to avoid further red cards. Despite that, Valencia could not find the goal. How? Who knows. All this against a team fighting relegation.

Valencia is known to struggle against team's that park the bus and Leganes did that for the entire second half with all their players behind the ball. This proved the case once more, with Valencia having no answers to the tight defense of Leganes.