Finally, after the doom and gloom of late, we have some very good news, first mentioned in the comments by our contributor Kuku.

Hugo Guillamon has signed a 3-year contract extension, until 30 June 2023. 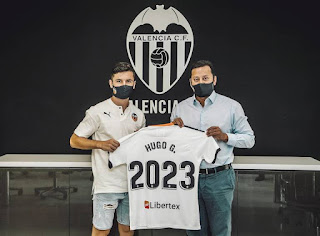 His release clause is set at 80 million euros. Guillamon, of course, broke into the first team after the restart in a position where Valencia were badly in need of players with Garay leaving and Mangala and Diakhaby proving error-prone. It's a much needed boost to the back line, as he was out of contract and Villarreal were reported to be interested.

Meanwhile, the search for the new coach rumbles on. After the resignation of the previous sporting director, chief scout Miguel Angel Corona is now taking a more prominent role. A rumour on Twitter (here) is that he has proposed the options of Bordalas and Javi Gracia to Lim, with Ruben Baraja as a plan C. Mendes, in contrast, has proposed the options of Laurent Blanc and Leonardo Jardim. Of those, I'd probably go for Jardim, as he has good international experience, has worked well with young players and generally favours a more attacking style.

However, the way of doing it just shows the problems with the club. Why is Lim taking such a prominent role at all? Has he consistently demonstrated his footballing acumen? Obviously not. On the contrary, it seems that what he knows about football management could be written on the back of a postage stamp. In other clubs there would be a competent sporting director who makes this choice and then the owner simply rubber stamps it. Of course, Valencia being Valencia, we don't even have a sporting director. The involvement of Mendes is also worrisome. While Jardim interests me, there would be the suspicion that he would just be Mendes' inside man, so that Mendes could use the club as a shop window for his prospects, most of whom seem to come from his c-list rather than his top table. It is expected that the new manager will be appointed by next week, possibly Monday, as the club will return to training on 10 August.