Various stories are coming through that Celades has lost the dressing room and the respect of the players after a number of incidents.

The first situation seems to have been with Diakhaby. Following his last game, Diakhaby said that he'd had a productive chat with the coach, something which the coach confirmed at the time. However, later Celades was more critical of the player, blaming him (not without justification) for costing the team 2 points. Worse, commentator Pichi Alonso released a story saying that "club sources" had told him that Celades had met with Diakhaby, shown him a video of his errors and this had ended with Diakhaby leaving the meeting in tears. Diakhaby, through L'Equipe, flatly denied this. The bigger problem was that the feeling was that the leak could only have come from Celades, meaning that he was backstabbing his players. While Diakhaby will have little sympathy among Valencia's fanbase, things like this will seriously undermine the trust of players in the coach.

The second blow-up was with Maxi Gomez. Following the Osasuna game, Maxi got frustrated with the coach, asking why he was always the first subbed off. Discussions became so heated that allegedly Maxi aimed a headbutt at Celades and had to be restrained. He turned up at the next training session in apologetic manner, but was given a cold shoulder by Celades and told to go home, further angering him.

After being told that Maxi wouldn't feature in future games, other members of the squad got angry, seeing him as a key player. Ferran Torres posted a message of support for Maxi on Instagram. 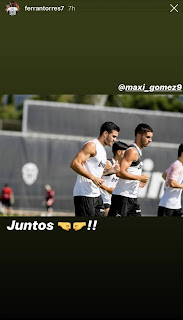 The club's captains met with sporting director Cesar Sanchez reaching agreement that Maxi would not be ostracised and would instead be fined. However, the mood following the meeting didn't seem to improve. Kondogbia posted on Instagram shortly afterwards: "¿El traidor? Es como una serpiente, pica y se esconde…" (The traitor? It's like a snake, it bites and then hides...") a message which seems to be aimed at the coach.

Celades' substitutions in general seem to be causing frustration. Guedes was visibly angry after being subbed off while having his best game of the season versus Osasuna. Another player who seems to getting annoyed is Ruben Sobrino. 4 of his last 6 appearances have seen him play 1 minute (twice), 2 minutes and 4 minutes. While Sobrino is below the level Valencia need, the player seems to be arguing, not unreasonably, that such brief cameos are pointless, as he has no chance to prove himself and make an impact on the game. His annoyance came to the fore in the Osasuna game, when the manager sent him out to warm up with 86 minutes played. Sobrino, given all the previous, got angered and Celades responded by not bringing him on.

Of course, a contrary opinion to this could be that the players should simply man up and accept the coach's substitute decisions. If it were one or two players, this would go fine, however annoyance seems to go throughout the squad now, with numerous players at odds with the coach. That never ends well. When I wrote my review of the season a few posts ago I said that Celades would probably be in the hotseat after the summer. Not only does that look unlikely now, there are serious questions over whether he can even make it to the end of the season. The team plays without direction, Celades' subs often don't make sense and the below par performances from the players are probably affected by growing dislike of the coach. Champions league is out now and even Europa starts to look like a struggle. Hopefully the owner will draw the necessary conclusions and hire an experienced coach to take us forward.

***Edit/update*** Stories that Celades offered his resignation to the club last night, but this was turned down. His days seem to be numbered.
Posted by John Valenciacf at 11:41 AM
Email ThisBlogThis!Share to TwitterShare to FacebookShare to Pinterest
Labels: feature, news, Players, squad
Newer Post Older Post Home