Though Valencia's win in the cup away to third level opposition was unconvincing, at least we got through. The same can't be said for 10 La Liga clubs, half the division, who have already gone out to lower league opposition. Both our quarter and semi-final rivals from last season, Getafe and Betis, are out. The biggest scalp this midweek was Atletico Madrid, who lost after extra time to Cultural Leonesa. Clearly, there's a motivation element here, with lower league sides taking it seriously while top division sides put out half-strength teams. Today's draw was: 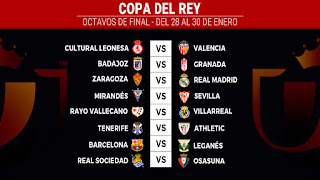 with Valencia now travelling to Leon to meet Atletico Madrid's conquerors the coming midweek. VAR will be used from this round on. Though Leonesa are of the third level, they've already shown they are not a team to be taken lightly. They're currently second in their division, just behind Logrones, who we narrowly beat. Leonesa are also an ambitious side: owned by Qataris, with decent investment, partnership with English side Leeds and owners who have a target of getting them to the top division by 2025. We need to make sure we are not the latest scalp on their planned road to the top.

The big question is how seriously Valencia should take this competition? Obviously, as last season showed, we can win it *and* achieve other objectives. However, we have a very tough February ahead, which will make or break our Champions league ambitions, with away games at Getafe, Sociedad and Atalanta. Put out a weakened team and we risk the fate of Atletico and many other La Liga teams. Take it seriously and we risk more injuries. Next Tuesday or Wednesday, we may get an answer.
Posted by John Valenciacf at 6:14 PM
Email ThisBlogThis!Share to TwitterShare to FacebookShare to Pinterest
Labels: Copa del Rey, news
Newer Post Older Post Home