So, the draw has just been made and the best one we could have hoped for. 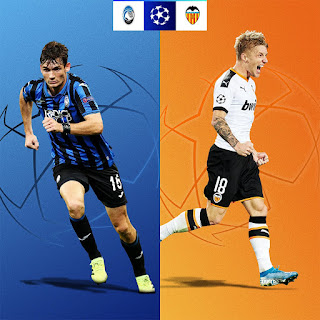 Valencia will play Atalanta in the next stage. They would definitely have been top of my wishlist, ahead of Lyon while avoiding teams like Tottenham, Dortmund etc. Valencia now has an excellent chance of making the quarter-finals.

While there are no easy teams at this level and no one can be taken for granted, this is a game we should win. Atalanta have never played a competitive game before against us. They are making their debut in the Champions league this season and just about scraped through their group after losing their opening three games including a 0-4 loss to Zagreb and a 1-5 drubbing by Manchester City. Their main goalscorer this season has been Luis Muriel, who joined from Sevilla after an unconvincing 2 years in La Liga. I think most would agree they're less of a challenge than Ajax or Chelsea.

So, all the signs are good, but can Valencia raise to the challenge?
Posted by John Valenciacf at 12:33 PM
Email ThisBlogThis!Share to TwitterShare to FacebookShare to Pinterest
Labels: champions league
Newer Post Older Post Home