Here we are, first game of the season! We start off at the Mestalla in front of our own fans in a very winnable game. Our opponents shouldn't be underestimated but for the ambitions we have this season and this being a home, a win is expected.

With all the transfer rumors in the past week over Rodrigo's future, he still makes into the starting lineup alongside Gameiro. Marcelino boldly claimed that without Rodrigo we would have to tone down our expectations for the season.

In midfield, Guedes and Soler start wide on either side of Coquelin and Kondogbia. The surprise here being the absence of Dani Parejo. This is probably due to the very late ruling been passed that Parejo and Gaya are eligible for this game. They technically should have been suspended due to yellow card count carrying over from the previous season but that rule changed. As such, Marcelino probably worked submitted his squad with that uncertainty. Both Gaya and Parejo aren't on the squad list (not even on the bench). 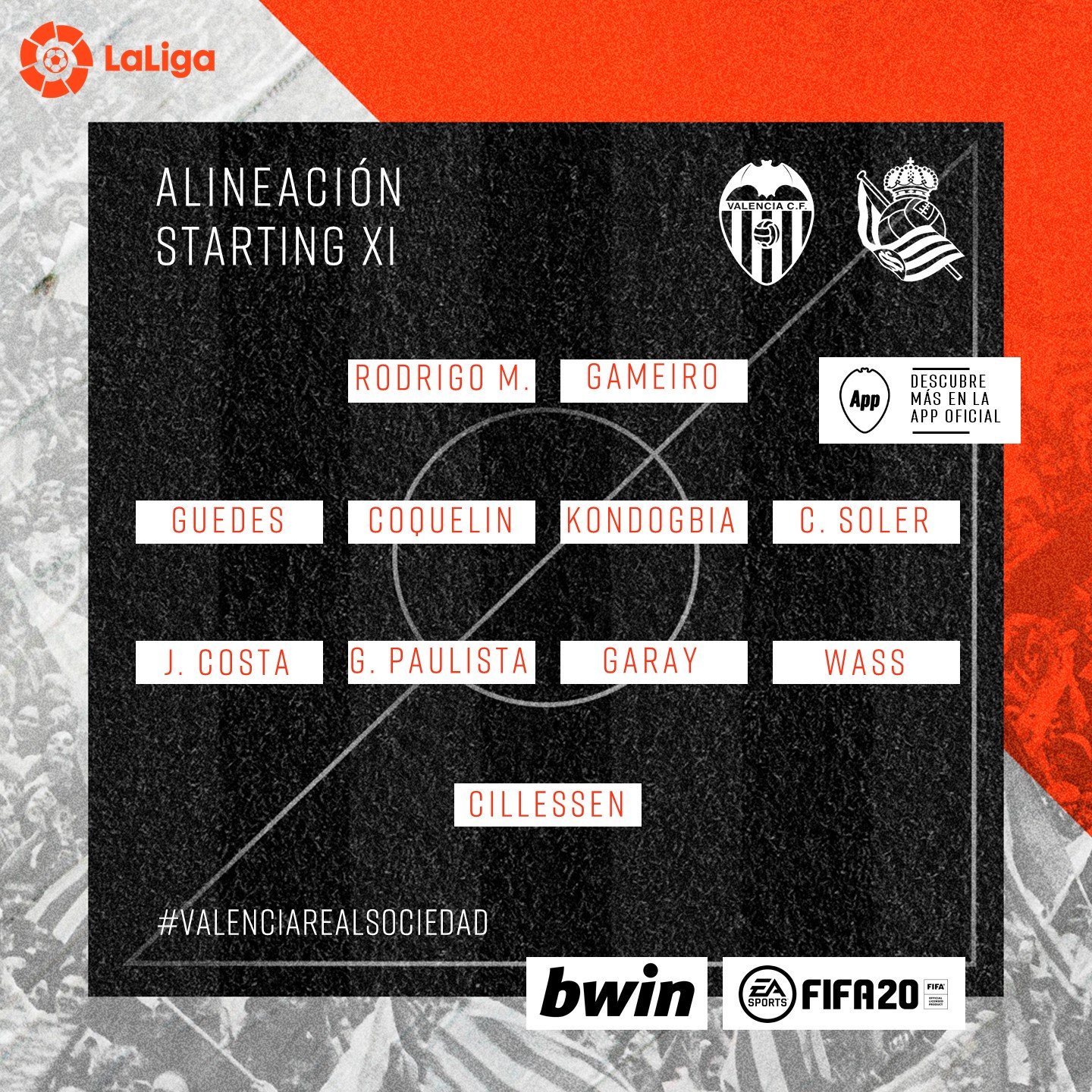 In defense, Jaume Costa starts over Gaya and Wass over Piccini. In the center Paulista and Garay is the expected pairing. In goal, we see Cillissen start which is probably the indication that he will be the La Liga goalkeeper barring injuries and Jaume will get his minutes in the Champions League and Copa del Rey.

On the bench we have: Jaume, Diakhaby, Piccini, Ferran, Cheryshev, Vallejo and Maxi Gomez.

I would like to be optimistic and say 2-0 if it was our regular lineup with Parejo and Gaya, especially if in front of our own fans. However, with some of these changes I would say 1-0.

That was a strange game. The problems that Valencia had last season seem to have carried over, at least into this first game of the season.

The first half was a shared game. Real Sociedad had the upper hand in the first part, really hammering away through the right side (our left) where Jaume Costa was trying to adapt. There were many loose passes and they often found the space in behind him. Paulista, Coquelin and Kondogbia were hard at work to keep the game level. When Valencia picked up the pace most of their efforts were from distance and not very troubling. The best chance came at the dying minutes of the first half with a Real Sociedad attempt inside the box following a squared ball. However, the striker sent it wide.

The second half was more of the same from Valencia. Some combination play, some dribbling but no end product. This was until the 57 minute mark where Gameiro started an attack, passed to Soler who controlled the ball beautifully in the air and found Wass out wide. Wass return the ball with a great cross to Gameiro who poked it past the keeper. The VAR technology would review the goal for quite a while until they finally award the goal to Valencia.

Valencia would have many chances to extend the lead but the finishing again wasn't there. Piccini would come on for Jaume Costa after he received a knock, with Wass moving over to left-back. Rodrigo would be replaced by Cheryshev with Guedes moving over to a striker role. Finally, Ferran would come on for Carlos Soler. The game seemed to be over but the total added minutes from the VAR check, stoppages and cooling break amounted to 8 minutes. In those 8 minutes, Valencia would get a penalty and Gameiro would step up to take. However, he went for the top corner and the effort would be too high. Kondogbia would have another effort a few minutes later only to miss again. In the final part of the 8 minutes, Real Socieded would move on the counter attack and get taken down by Garay at the very edge of the box for a free kick.

The free kick was taken and strikes the wall before bouncing out of play for a corner. However, the ball had struck Coquelin and on the arm resulting in a penalty call and a second yellow for Coquelin. Oyarzabal steps up to take the penalty and calmly slots it past Cillissen. The game was brought to an end right after that.

We really missed Parejo and Gaya today. The problems of last season that repeated in this game weren't just that Valencia couldn't put the game away with the chances they had. It was also the struggle they had whenever Parejo and Gaya were missing. Especially when Parejo was missing. The control and calm in midfield was gone. Marcelino was urging players to keep the ball at the opposing end of the field in the final minute. However, they lost the ball and the play resulting from the counter attack would lose us 2 points.

Next game is away to Celta Vigo.