Valencia have made official the signing of Maxi Gómez. 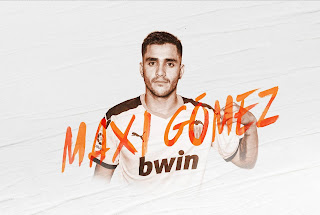 He joins on a 5-year contract with a 140 million release clause. Valencia identified the player as a signing back in April and hoped to get the deal done in time for the transfer window opening, but Celta delayed in order to see if he did anything at Copa America and then strong competition from West Ham, who were offering at least double the salary that we were, led to a drawn out transfer saga which has thankfully been resolved in our favour. As part of the deal Santi Mina leaves and rejoins Celta with Jorge Saenz also going there on loan and Valencia paying 14.5m, with a possible 1.5m more performance related.

I called last year for Maxi to be signed, 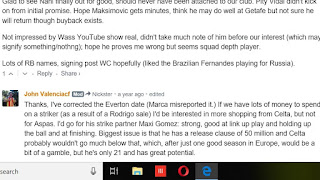 so I'm really happy about this signing.

There are a surprising number of our fans who seem to be against this. The main arguments seem to be

I think the cost is a fair price and as for Mina vs Maxi comparisons, those need to be seen in the context of Celta being fairly rubbish the last few seasons. Apart from Aspas, Pione Sisto and Wass were the only players capable of supplying chances. At Valencia he will have Guedes, Parejo, Soler etc providing chances. Time will tell, but after the Batshuayi fiasco the club has gone for a player proven in La Liga and the only players who have scored more in the last two seasons are Messi, Luis Suarez, Griezmann, Aspas and Stuani, all of whom are too old or unattainable. The fact that he has turned down a much bigger wage in England is a positive sign and already wins him points in my book.

The slight negative in this is the loss of Santi Mina, who'd proved himself a useful third option up front in recent times. Mina joined us at the start of July 2015 having impressed with Celta, leading Valencia to pay his buy-out clause of 10 million, with Mina refusing a new contract in order to sign for us, something which annoyed Celta fans as much as Alcacer's exit annoyed ours. Mina's early times at Valencia were really disappointing. Used up front either on the right or left of a 4-3-3 he struggled to make an impact and it wasn't until his 14th game that he scored, hitting a late equaliser against Barcelona. He repeated the feat later that season, scoring the winner at Barcelona, capping off a 22-pass move. (Incidentally, it got lost in the euphoria, but Valencia's first in the Copa final came after a 16-pass move, when it comes to tika-taka, Valencia can beat Barcelona at their own game.) That season also saw his best game in a Valencia shirt, scoring two and assisting three in a 6-0 rout of Vienna in Europe. He also scored what I think was one of his best, sprinting the length of the pitch to score the winner at Granada.

Despite that, his stats and performances remained disappointing until the arrival of Marcelino. Like Rodrigo, he benefitted from playing more central, improving his performances and scoring more frequently, even overtaking Zaza in the pecking order at the end of 2017-18. However, last season saw him behind either Batshuayi or Gameiro to partner Rodrigo and ultimately it's understandable that he wants to head back to his boyhood club where he'll be guaranteed starter.

Lastly, the week just gone saw the departure of Aymen Abdennour. He arrived at Valencia on the back of strong performances with Monaco for 21.8 million as the replacement of Otamendi. It quickly became apparent that he was nowhere near that level as a series of horror shows gifted goals to opposition teams. It didn't help that his defensive partner was often the equally useless Aderllan Santos and together they made up what was probably Valencia's worst defensive duo this century. After 29 appearances in his first season, he saw injuries in his second but was gradually phased out under Voro. The only time he ever looked remotely useful was under Prandelli, but that was because there was a back three with Garay cleaning up after him. Valencia loaned him out to Marseilles, hoping to get back at least half of what we paid, but he also flopped there and in the end the club has just cut its losses and let him go to Kayerispor of Turkey on a free. Thus ends one of the worst signings of recent years. I think the signing of players like Gomez instead of such costly flops shows the progress the club has made.