Jeison Murillo's time at Valencia is at an end. We signed him as one of the centre backs for the 2017/18 campaign and he had a fair few starts in the early months, playing 8 of the 12 games after he signed before getting injured for 3 months. 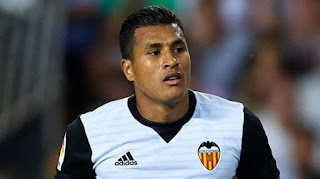 When he returned he got a few games, but that was because Garay was injured and by that point, Garay and Gabriel were Marcelino's main choices. In 2018/19 he was mostly sidelined, playing in the home games against Juventus and Celta before playing his final game in the Copa at Ebro. He then joined Barcelona on loan as part of a joke with his agent. Sadly, it also didn't work out for him as he played just 1 full league game, another as a late sub and a couple of games in the Copa. The deal takes him to Sampdoria on loan, with them paying 2 million, which will mostly cover his wages. They then have an obligatory buy of 13.5 million. Many of us wanted him to stay as one of four defenders but given that Marcelino clearly doesn't count on him, this is for the best and at least Valencia make a small profit of 1.5 million on the deal.

The other news is that the long drawn out saga of Maxi Gomez seems to be over. Valencia first expressed their interest in late May but Celta understandably decided to wait until Copa America was over on the off-chance that his value would rise. It didn't as he didn't play but when the tournament finished, West Ham had renewed their interest in signing a player that they first tried to get in January. While Valencia seemed the obvious choice, due to language and Champions league football, West Ham were able to put a much higher salary on the table. That a club that finished 10th, never gets near Champions league football nor challenges for anything is able to do that is a serious indictment of La Liga's lousy financial model in the last decade that has allowed C-list English clubs to outbid us.

Just yesterday, it seemed that West Ham had won the race but, credit to Celta, they were more interested in honouring their agreement with us and maintaining good relations than chasing the money. Of course, their motives are not all altruistic, they regain Santi Mina and get Jorge Saenz on loan for 2 years as part of the expected deal. I think this will be good business for Valencia when confirmed.

There are still many questions to be answered. Will Rodrigo and Piccini stay? If not, who replaces? Who will be the fourth defender? Who will Valencia sign as Parejo's understudy, if anyone? Who will take remaining unwanted players (Abdennour, Medran, Nacho Gil, Sobrino etc) off Valencia's hands? Plenty to do, but I think the Murillo and Gomez deals would be a good step forward.