Today is a special anniversary for me. It was exactly 16 years ago that I finally got to visit Mestalla. Valencia at that time had been on a roll. Two unsuccessful Champions league finals in a row in 2000 and 2001 had been followed by the first league title in over 30 years. After all that excitement, the 2002-2003 season was a let down.  In the Champions league, after negotiating the two group stages (this was the last to feature two group stages) Valencia went out in the quarters to Inter Milan on away goals. In the Copa, Valencia's rotations didn't work and after a 3-3 draw at now defunct third level Alicante CF, we lost on penalties in the round of 32.

In La Liga, Valencia had struggled, dropping from third to the fringes of the Champions league places in spring. The biggest problem was one that had been clear the previous season. Even when we won the title, Ruben Baraja had been our top scorer with a risible 7 goals. Strong defence had saved us. (Sound familiar?) This season had been the same, with the team really struggling for goals. At the time of this game, John Carew was the leading scorer, with a disappointing 8 goals.

A 1-2 defeat to Real Madrid in the previous game at Mestalla in the 35th round of games had allowed Celta to overtake us for fourth. So this game, the 37th of the season, was crucial to our Champions league hopes.

Our rivals, Barcelona, had their own issues. The arrival of a certain little Argentinian guy was a few seasons in the future and they had missed out on the top three in the previous three seasons and were languishing in seventh place. With both cup finalists not in the top six, Barca were in serious danger of missing out on Europe altogether. They came into this game hoping to avenge Valencia's 4-2 win at the Camp Nou in January.

The positions at the time of the game were:

Real Sociedad were chasing their first title since 1982 and would ultimately be unsuccessful.

The day of the game itself had been baking hot, the season started a bit later then and went on a month longer, finishing on 22 June with the cup final a week after that. I was looking for work in Valencia at the time so had to settle for the cheaper seats "in the clouds" at 42 euro a go. 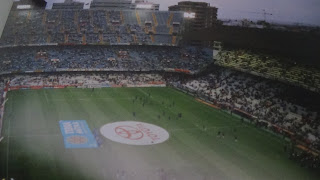 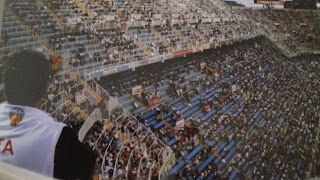 Valencia lined up with a 4-2-3-1. Canizares and a defence of Carboni, Marchena, Pellegrino and the on-loan Reveillere. Screening them were Baraja and De Los Santos. The attacking midfield was made up of Kily Gonzalez, Aimar and Rufete, supporting the lone striker, Carew.

Luis Enrique, of course, would go on to manage Barcelona and Spain, while Gaizka Mendieta was making his first return to the Mestalla since his transfer two years earlier.

The game itself proved a baptism of fire for me. Strangely enough, despite it being a relatively unimportant league game in the pre-YouTube era, the full game is online. I only recommend it if any of you are feeling masochistic, though.

The first half saw Barcelona have the better chances and Canizares had to make a couple of saves. The dynamic changed just before half-time. Marchena brought down Mendieta and then Carew lost it a bit, body checking the referee and then getting in his face to get a debatable straight red card. Mendieta scored to make it 1-0.

Those events put Valencia on the back foot for the second half. Juan Sanchez came on for Rufete, with youth player Borja Criado later coming on to make his third and final appearance for the first team. Those attacking changes failed to produce the equaliser and, in the 73rd minute, the first half repeated. Barcelona countered, Luis Enrique dribbled past two of our guys and was brought down by Carboni just before he could shoot. A clear penalty, but the double punishment of a red card for Carboni seemed harsh. 0-2 down, with 9 men and news coming in that Celta were 2 goals up against Sociedad spelled the end of Valencia's Champions league hopes. Marc Overmars added a third for Barcelona before Juan Sanchez gave us a late consolation goal.

Sociedad's defeat at Celta cost them the title. Carew's season had ended on a low note, he was loaned out the following season and never kicked a ball for Valencia again. Mista took over as main forward and produced a better following season.

Valencia went on to finish fifth, qualifying for the UEFA Cup which we won as part of a league and European double. For me, it was a sign of things to come: harsh and dubious refereeing decisions favouring Barcelona and disappointing seasons would feature quite a bit in the next 16 years but those just make the wins even sweeter.

How was your first game at Mestalla?