Ruben Sobrino to be sold 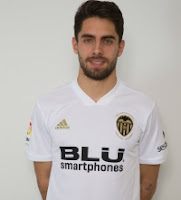 Valencia CF is looking to offload Ruben Sobrino this summer transfer window even though the player only arrived in January this year. Truth of the matter is that Ruben Sobrino didn't impose himself on the coach and failed to displace Rodrigo or Gameiro or Mina out of their position even though they were all struggling for goals in the first half of the season.

This is why he is not surplus to requirements, as he was only brought in to displace any of our misfiring forwards in January and having failed to do that he is now our 4th striker and one which Valencia CF don't have a need of.

Ruben Sobrino arrived for 5 million euros from Alaves CF to Valencia CF, though he only made 3 appearances in La Liga and few more in the other competitions. Even if Valencia CF sell Rodrigo Moreno, which is looking more and more likely as Real Madrid, FC Barcelona, Bayern Munich and Manchester United are all interested in the player, we won't be needing the services of Sobrino and will instead be looking to bring a better striker and one who's a bigger future talent.
Posted by SlickR at 7:47 PM
Email ThisBlogThis!Share to TwitterShare to FacebookShare to Pinterest
Labels: news, transfer speculations
Newer Post Older Post Home