With the Neto/Cillessen swap deal done and solving Valencia's financial fair play problem, we are starting to see some movement in the transfer market. 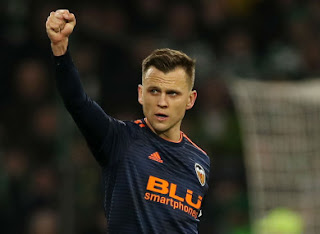 Cheryshev completed his second loan spell with us last season, netting 4 goals with 5 assists on top. Valencia's buy option rose from 7.5 to 10 million as a result of Champions league being achieved, but we'd been clever enough not to make it compulsory. As a result, with the player wanting to continue with us and Villarreal wanting him off the books for FFP reasons, it looks like the amount will be around 6 million.

He was a solid alternative to Guedes and is a back-up option for the forward line, as he showed in the game against Celtic. He also led the way in "key passes" being second only to Messi among the top 6.

Of course, the elephant in the room is his injury record, which affected both his loans with us. He was unavailable for 17 of the 61 games last season, so it will be ok, if he stays fit.

The second piece of business is the departure of Ruben Vezo. As he's only 25, it's hard to believe he's a grizzled veteran of Valencia. Only Parejo, Jaume and Gaya have been with the team longer. Djukic signed him in the autumn of 2013, with the transfer going through the start of the following year. His opportunities at Valencia were always limited and he remained a back-up player. He did get more playing time in Marcelino's first season, as the coach used him as a right back in the away games, but he featured less and less this season, with Marcelino using Wass instead at right back. Following a successful loan at Levante, it looks like they'll pay us 5m plus a possible 1m more for the permanent transfer. His previous club gets 25% of that.

The signing of Cheryshev almost certainly means that Denis Suarez won't be joining and it looks like he'll join Celta instead. Rafinha, however looks likely to be coming and that's similar to Cheryshev: a good player but dogged with injury issues.

Valencia are still negotiating with Celta for Maxi Gomez, with West Ham still offering competition. There are reports that a deal could be struck but the figures seem unacceptable. 15 million plus Mina, Jorge Saenz (with a buyback option) and another player (Racic or Villalba) on loan. I've said many times that I think Gomez would be an excellent signing, but he's not worth that much. Maybe a swap of Mina and 10 million absolute maximum.