This is it then. Very often this season, we've described games as "must-win" but this truly is one, as the finish line of the season is in sight. Valencia had a bit of temporary cheer when Sevilla got mauled at home by Leganes (their manager being Mauricio Pellegrino.) His efforts at doing his old club a favour will all be for nothing if Valencia don't win tonight. Getafe's win over Girona was a double whammy for us. Not only does it put Getafe 6 points clear, a Girona win would have relegated Huesca. As it is, Huesca are still mathematically alive and fighting for an outside chance of survival. As we've seen in recent weeks, the bottom teams are fighting tooth and nail: Rayo beat us and R.Madrid (but still went down) and Valladolid have just beaten Bilbao and therefore none of them can be taken lightly.

Another point to note is that Huesca's league position doesn't tell the full story. Anyone who has watched them will know they are better than it suggests. Indeed, they are unbeaten in 6 games, though they've only won one of those. Valencia barely scraped a win at Mestalla over them, Piccini's 94th minute strike sealing the three points with Marcelino's job on the line.

His destiny as Valencia coach may still depend on doing the business against Huesca. A number of fans are fed up with the team's conservative style this season and top four for the second season running would go a huge way to placating doubters. To be honest, I think he'll continue anyway, as top 6, copa final and at least Europa league semis will be good enough for the club's hierarchy, but fan unrest spilling over into next season would not be good. Valencia have lost 3 in a row for the first time this season and really need to shake themselves out of this mini-rut and keep the pressure on Getafe. Sadly, their next game at Barcelona may not be as tough as we'd hoped as Barcelona are now resting players with the league in the bag. 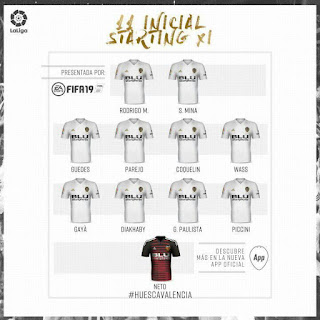 A few changes for the game with, thankfully, none of the weirdness we saw last game. Soler and Garay are rested, Guedes returns to the wing and a forward two of Mina and Rodrigo starts.

A win will guarantee Valencia European football next season in at least Europa league, while making it impossible to break the 18 draws in a season record (they could only, erm, draw with that record.)

==FIRST HALF REPORT==
Where did that come from? Valencia escape their recent malaise in style, blasting a poor Huesca away to lead 5-0 at the break. I think that's the most decisive Valencia first-half performance since the win over Vienna at Mestalla in early 2016. I was struggling to get a stable stream at the start so missed the early goal from Wass. From the replay, it was a pass through from Gabriel with Wass twisting and shooting past the keeper. The second came from a terrific pass from the right (Coquelin?) to find Mina whose through ball put Rodrigo one on one with the keeper and he rounded him and scored from a tight angle. The third came from an interchange between Mina, Rodrigo and Guedes with the latter finding Mina in space in the area. He took his time before placing it home well. Mina, of course, only scores in twos and he got the fourth, Piccini combining with Wass, whose ball across the box was turned in by Mina. The fifth almost certainly goes down as an own goal. Awful defending with a blind back pass straight to Rodrigo. I'm nitpicking, but he should have done better and while he was dithering, the defender slid in and put it in his own net.

Main question now is who to take off to rest with the Arsenal second leg upcoming. Parejo, Rodrigo and Guedes would be an obvious three, with Lato for Gaya (or Guedes) an option.

==SECOND HALF==
With the Arsenal game ahead, Valencia understandably took their foot off the pedal in the second period, focusing on avoiding injuries and bookings. Parejo and Guedes went off to rest at half time for Soler and Ferran and it was the latter that contributed to the next goal, a superb chip over the defence for Mina who passed across to Rodrigo for 6-0. Rodrigo went off soon after with a minor knock just as a precaution.

The only negatives came in the Huesca goals. Poor defending to let them get to the by-line then Neto spilled the save and Piccini had lost his man. The final goal in injury time from a penalty came after Diakhaby blocked a shot with his arm. That's the  fourth time he's given away a penalty due to handball this season and this is becoming a problem.

Overall, a solid and morale boosting win. Now we have to hope that another former Valencia manager, Valverde, puts out a strong team and beats Getafe next week as otherwise we're reliant on Villarreal, who are safe.