Valencia's last game ended in a hugely disappointing defeat to Eibar, a team that had nothing to play for. That Getafe and Sevilla also lost makes it bittersweet: good that it means Valencia have an outside chance of 4th place but bad in that the team blew a chance to jump into 4th. Now, with only 3 rounds left, the team has to win all 3 remaining games, 2 of which are away against teams fighting relegation (we lost to Rayo in similar circumstances) and then hope that Sevilla and Getafe each lose a game. Time is running out and therefore the Europa league now represents our best chance of getting Champions league football.

The match squad contains few surprises, but does have the team light in midfield, with Cheryshev and Kondogbia injured and Coquelin banned. 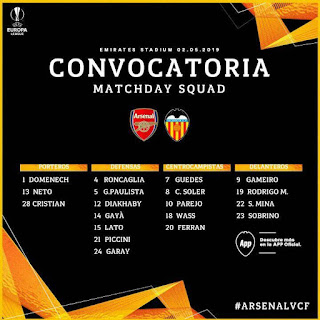 Some of you have said in the comments that we should have both Gaya and Lato on the left, with one of them in midfield. I would go for that too, but doubt it will happen. I would expect Marcelino to go with

Arsenal are in a poor run of form, so hopefully Valencia can keep a clean sheet and maybe nick a crucial away goal.


FIRST HALF
I don't know what to make of that, either the line-up or the performance. Marcelino put in SIX defenders and it wasn't clear what the formation would be. Turns out to be 5-3-2 with Diakhaby playing a defensive midfield role.

Valencia started brightly and from a free kick move the ball was put across the box. Garay then produced one of the misses of the season, shooting over an empty goal when scoring would have been easier. A few minutes later Valencia had the lead and a crucial away goal. Again from a set piece, Cech and the Arsenal defence were all over the place, with Rodrigo heading back across the goal and Diakhaby heading home. Arsenal looked disorganised and another chance arrived. Not sure what the Arsenal defender was doing when he headed it back to the keeper but Guedes stole in but shot over.

The tide turned after the 15th minute, now it was Valencia's turn to be disorganised and shaky in defence. Arsenal played us at our own game, a fast counter with a goal after defensive errors. Neto came out and got caught in no man's land. 7 minutes later Valencia were behind, another poor goal to concede, a cross into the box with Roncaglia allowing Lacazette to head home and again, Neto probably could have done better.

Some positive signs, but Guedes has struggled to make an impact and so many defenders at times seems to have made the defence worse, not better.

SECOND HALF
Well, that's really poor. What is the point in having so many defenders on if we concede soft goals? Tie over for me, I just can't see us winning 2-0.