Valencia goes into the second leg of its Europa league quarter final tonight with a solid lead. The 2 late goals give the team a considerable cushion, so the main enemy is complacency. Marcelino therefore has to balance keeping the squad fit with getting the job done. Jaume, Piccini, Kondogbia and Rodrigo are out, while Garay gets a rest. Also a consideration, yellow cards are reset after tonight and Gaya, Diakhaby, Guedes and Coquelin will benefit from that as, if they get a yellow tonight, they miss the first leg of the semi at Arsenal (or Napoli.) 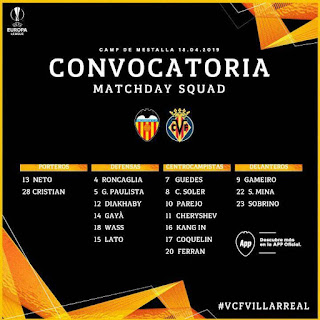 Given all that, I think we will see Neto and Lato. Giving Jaume a game would have been an option if fit, but playing Cristian would be a gamble too far. Gaya both needs to rest and avoid a yellow, so Lato should get the full game. For the rest of defence, I would risk Diakhaby, even if he gets the yellow, we can cover with any of the other three. Play Gabriel in the centre and Roncaglia at RB. Roncaglia hasn't been great at RB, but Wass needs some time off with Piccini out.

In midfield, Guedes should sit this one out with the yellow card threat, meaning Cheryshev starts. In the centre I'd play Parejo and Soler, with Ferran at right wing. I would then aim to replace Parejo with Wass at half time to rest him, and Cheryshev with Kang-In around minute 70.

Valencia were clearly superior in the first half, which was affected by driving rain. We broke the deadlock in the 12th minute. Guedes outmuscled the defender and chipped a nice ball into the path of Lato, who produced a cool finish from an angle for his first senior goal.

Valencia should have had more, but Mina made the wrong decision when we had an overload in defence and Gameiro also messed up a couple, misplacing a chip over the keeper when one-on-one.

There's a little bit of mild frustration that we haven't got the second goal we need to start making subs with an eye on the upcoming Betis game on Sunday.

A little bit of a strange substitution at half-time, Soler being replaced by Gabriel, with a reshuffle moving Roncaglia to RB and Wass to central midfield. The second goal came in the 53rd minute. Parejo's free kick took a huge deflection and it's not even sure he'll be credited with that. Parejo came off just after minute 60 for Coquelin, another strange sub since Coq was on a yellow and we could've just put Cheryshev in instead. Kang-In for Guedes was the last sub. After that, Valencia understandably relaxed a bit, the team hardly ever went past the halfway line. That's ok, but what wasn't was the team's passing became super sloppy and the team barely put more than 2 passes together. Near the end, Coquelin got a yellow card which suspends him from the first leg at Arsenal. It was never a yellow, the Villarreal player blasting it at him and the ball bouncing off his knee on to his hand. Maybe the club can appeal? But as I say, stupid decision from Marcelino to play him when the team had a 5-1 aggregate lead.

Good performances from Diakhaby, Lato and Wass with Guedes standing out again. An easy win overall and now Arsenal await.