I think a few of us were a bit nervous about this one, more so when we saw the match squad and team line-up, without our THREE first-choice strikers, left back and second-choice defender. It meant it was a very makeshift line-up, in fact I think we've put out a stronger line-up when facing third level teams in the cup. 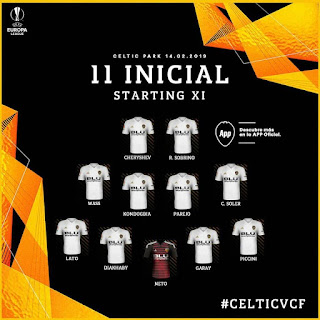 Yet, it worked and the team eased to a comfortable away win barely breaking a sweat. Marcelino had read it exactly right tactically. Wass was on the left to give extra defensive cover and he and Soler covered their fullbacks, preventing them from playing it out from the back. Parejo and Kondogbia bossed the midfield and on the rare occasions they did get past there, Garay and Diakhaby were easily able to handle their attackers. We did what we often do, sat back, let them pass around uselessly and tire themselves out, then counter attack. Celtic looked about as threatening as an 80-year-old granny with a water pistol. It was only in the first 10 minutes that they did anything, forcing a shot from Neto with a stinging shot.

We dominated the game after that, Wass nearly scored with a header before we got our opening goal. Intercepting, then a brilliant pass through for Sobrino who had just stayed onside. Good decision from him, rolling the ball to the side for Cheryshev for a tap-in.

I struggled with lagging streams in the second half, but it was pretty much the same story. We were so confident that we took Parejo off at half time to rest him. The second goal was similar, great work by Coquelin, passing out to Wass who found Cheryshev on the wing and his cross allowed Sobrino to fire home.

Guedes came on for Cheryshev as a forward, but his time up front was cut short. Piccini suffered what looked like a groin injury, so Gameiro came on, with Wass and Guedes dropping back. Piccini's injury was the only black spot. Kondogbia did pick up a booking which means he'll miss the second leg, but it was soft and I suspect he did it on purpose so he can start the round of 16 with a clean slate.

Solid team performance. Great debut from Sobrino, good games from people like Wass and Soler who haven't been performing that well recently. Key players rested. Result. Of course, there are 90 minutes still to play, so we can't be complacent, but it would be a huge upset if we blundered away such a lead in front of our own fans. If Celtic can't beat our half strength team at home, they're not going to do it away.