Incredible stuff. Valencia looked like they had a mountain to climb after conceding a soft goal in the first minute. 38 seconds had gone to be exact. Getafe showed their dirty side as usual throughout the game and half time arrived with Valencia needing 3 goals. It looked like the first had arrived in the 55th minute with a good cross put in and Mina finishing well, but it went to a VAR review and in that, it looked like Ferran, who had played a part in the build up, was slightly offside. 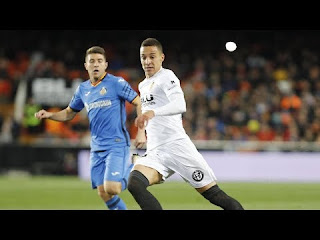 In the 60th minute, Rodrigo put us level but Getafe sat back in depth frustrating Valencia's attempts. Getafe were reduced to 10 men in the 73rd minute but still, the game reached injury time with Valencia needing two goals. Getafe's constant time wasting resulted in seven minutes added. Cheryshev, Kang-In and Gameiro had all come on and the latter two played a key part. First, a centre from Kang-In was headed back across goal by Mina for Rodrigo to score in the 91st minute. A minute later Valencia lost the ball and the defence found themselves outnumbered with Getafe looking likely to score, however their shot was saved and Valencia raced up the pitch. Kang-In found Gameiro and he put the ball across the goal for Rodrigo to score his first hat trick. What a time to do it.

Valencia held on after that, with tempers boiling over at the end and what seemed like a fight, leaving Gabriel bloody and reports (unconfirmed) that Diakhaby, who never played, got a red card?

If you went to bed during this one, I don't blame you, but unfortunately, you've missed one of our most dramatic finishes in years. The team showed huge character to claw this one back and hopefully this will be a springboard for us to continue our mini-revival.