Valencia finally secure their first home win of the season and do so in convincing fashion, with a 3-0 win over one of the relegation favourites. 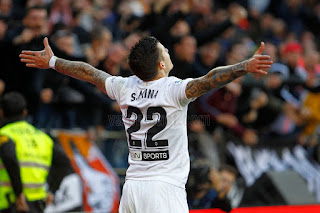 Just one change in the line-up compared to the previous game: Diakhaby returned for his first league game since September replacing Garay. Is the latter injured again?

Valencia started well and clearly looked determined to get the 3 points from this one. Soler and Guedes both had chances in the opening 15 minutes but their keeper kept them out. It wasn't all one way and all too often attacking moves from Valencia broke down due to poor movements, decision making and most of all, passing. There were also a few individual errors from Wass, Gaya and Diakhaby which could have proved more costly. Rayo were starting to come back into it. In minute 20 an attack from them hit the post, with Neto saving the rebound.

By minute 30 Rayo were even starting to look a bit better than us when the breakthrough came. Rodrigo nodded a through ball on to the on running Mina, who finished confidently. Bonus point for ditching the LeBron James celebration too!

Valencia had a penalty shout soon after that when Rodrigo tangled with their defender but it was 50/50 situation. Guedes then produced a moment of great skill and acceleration, but messed up the final pass.

The start of the second half followed the pattern of the first, with Valencia dominant. The second came from great work by Rodrigo. It looked like the pass to him had been overhit with the defender shepherding it out, but he sprinted on to and forced a corner. From that, Gabriel chested it down and forced a save from the keeper, with Mina following up to score. For once, Valencia were looking comfortable. Mina was subbed off soon after for a rest and a deserved ovation. Gameiro came on and finished it off. A decent counter attack found him, he played a great ball into the path of Rodrigo and the latter smartly laid it back instead of shooting for Gameiro to wrap up the game.

Wouldn't get too carried away with this one, Rayo, after Ebro, are the weakest team we've played this season, but a comfortable scoreline reflected a good performance, boosts the team's morale and gives us our 4th win in 5 games to quieten veteya ideas.

PLAYER RATINGS
Neto 7 - one of the few players on the team who've been better than last season, another good performance today.
Gaya 6.5 - limited in attack but did his defensive duties well
Diakhaby 6 - his lack of recent games showed as he made a couple of mistakes, but nothing major
Gabriel 8 - continues to have a great season and has been a rock in defence this year
Wass 6.5 - looks better and more useful in this position, but still not the long term RB solution, did well in attack but looks less secure in defence
Guedes 5 - had one or two good moments but is out of form, lacks confidence and is far from the guy who lit up Mestalla last year
Parejo 6.5 - solid game in midfield, but has lost his free kick mojo
Coquelin 7 - positional play and defensive cover was excellent. Has been in good form since his return and has actually been better than Kondogbia this season
Soler 6 - combined well with Wass, but not one of his better games, looked a bit tired
Rodrigo 7.5 - a great game with key involvement in all 3 goals, just needs to score to build up his confidence
Mina 8.1 - man of the match, confident finishes and good understanding with his strike partner has given him 6 goals in 5 games since his injury return. At least we have 1 striker from 4 who can score.

Subs
Gameiro 6 - good cameo, did everything right for the goal
Ferran - not enough time
Vezo - don't think he touched the ball?