Nacho Gil and the international break

Valencia announced this week that Nacho Gil will join Elche on loan for the remainder of the season, however the transfer cannot go through until the transfer window opens again on 1 January. Gil has had a bit of a disappointing time at Valencia. He did well for the reserve teams, thought he deserved better, and submitted a transfer request (with Villarreal interested) in January 2017, which the club refused. Voro brought him on as a sub in a couple of games the following month, before dropping him. Marcelino brought him back into the set-up for a few Copa del Rey games and he also started on the left in the league away to Eibar and Las Palmas, before being loaned out to the latter. His time at LP was also a disappointment and he clearly hasn't made the grade at Valencia, so a loan with a view to moving him on permanently, seems to be the best option.

During the international break, Valencia took whatever players were not on international duty to Alcoyano for a friendly, winning 3-0 (highlights here.) Gameiro and Mina both did well and scored the first two goals but the best player was Ferran Torres, playing from the left, who capped off a great performance with a super goal.

The international break was a good one overall for Valencia players. Batshuayi scored twice for Belgium, Cheryshev scored for Russia in Turkey and for Spain, Rodrigo featured in both Nations league games and took full advantage of Costa's absence. Against England he provided an assist for the equaliser before scoring what turned out to be the winner and was widely praised for his performance, with some even naming him man of the match. Against Croatia he was overshadowed by a quality performance from Asensio, but still managed to slot home in a 6-0 rout. The other good thing in that game was at left back 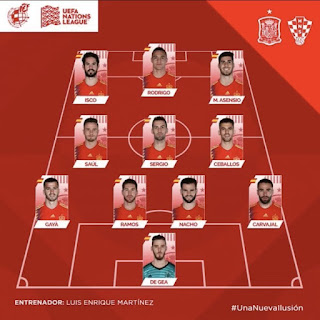 with Gaya finally making his debut. He justified his selection with a solid performance, covering well in defence and contributing several quality crosses. He wasn''t the only debutant, Neto made his first appearance for Brazil, playing the full 90 minutes and keeping a clean sheet in a 5-0 win over El Salvador in the USA. Murillo also played all 90 minutes of a friendly for Colombia. Guedes was maybe the one who could be disappointed, as he was an unused sub in both Portugal games, but as he hasn't played a competitive match yet this season, it's understandable.

Valencia have a tough and critical week coming up. (Tough month actually.) First we welcome Betis to Mestalla on Saturday before opening up our Champions league campaign against Juventus, then finally going to Villarreal. Our start so far has been weak, but not disastrous: the results against Atletico and Levante were the same as we got last season, with the concern centring on the Espanyol defeat. However, we are only 2 points behind rivals like Sevilla, Betis, Bilbao and Sociedad and ahead of Villarreal, so can quickly make up ground if we start winning. So no need to panic yet, but if we do not get a win against Betis, alarm bells will start to ring. While they've made a few good additions in the summer, they remain weak at the back and Quique Setien's gung-ho approach is ideal for our counter attacking style, which is why we put 8 past them last season, so I expect a win.