So now we know our opponents: Juventus, Manchester United and Young Boys Berne. 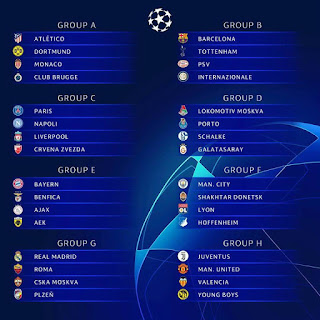 A tough group, Juventus will be the favourites and Young Boys the underdogs. Our most likely route to qualification involves taking 6 points off the Swiss and hoping that Man United continue their malaise such that we take points off them.

Interestingly, Valencia have never faced either Young Boys or Juventus in Europe before. We have faced Manchester Utd on 4 occasions before. We beat them in the 1982/83 UEFA Cup first round. We then faced them in the Champions league 3 times. In 1999/2000 we drew 0-0 at Mestalla and lost 0-3 away in the second group stage. The following year two draws against them in the second group stage. The most recent occasion in 2010/11 we lost 0-1 at Mestalla and were leading at Old Trafford until they equalised late in the game.

Fixture dates and times are

A tough enough start, we really need to take some points from the first two, then go into the double header vs Young Boys in the middle and take 6 points.

Lastly, Guedes' contract was confirmed earlier by the club. He signs until 2024 with a release clause of 300 million euro (!) The release clause is monster, I'd heard 175m talked about so this figure is obviously good as it shows again that the club is willing to protect its assets. If he has a great season and the predators appear we can wave them away or make them pay a suitable 9-figure sum.
Posted by John Valenciacf at 7:24 PM
Email ThisBlogThis!Share to TwitterShare to FacebookShare to Pinterest
Labels: champions league, news
Newer Post Older Post Home