All times are Central European summer time (GMT+2) so the last 2 will kick off an hour earlier. The last game will then be a home game for our annual Orange Trophy, against Bayer Leverkusen at 21:30 on 11 August.

More exits to report this week. Nani was the biggest. He returns to Sporting Lisbon on a free transfer. Valencia will get 40% of any future sale. He joined us in 2016 for 8.5 million euro and a cold reading of his stats for 2016/17 aren't bad, with 5 goals and 8 assists, but in reality he was a huge disappointment. His time with us was blighted by injury and inconsistency. We did at least get 2 million from Lazio for his loan but otherwise he's yet another costly flop. Unless he makes a big money move to one of the retirement pastures like China, the MLS or the Middle East, it's unlikely that the 40% sell-on will be of much use, but at least we save on his high wage.

The next high profile departure is Nacho Vidal who has joined Osasuna, again on a free, though with Valencia retaining 50% of his rights, including of any future sale. Deportevalenciano report that there isn't even a buy back option, which seems strange. What a massive disappointment he turned out to be. Just last October he was being named as one of the five best young La Liga prospects, a future Spain international and a certain target for top European clubs this summer. He started last season okay, playing the full 90 against Las Palmas and the last 15 minutes at the Bernabeu, but whatever Marcelino saw in training, he didn't like. It would be a few games before he played again, in the away game at Sociedad where he scored with a great finish 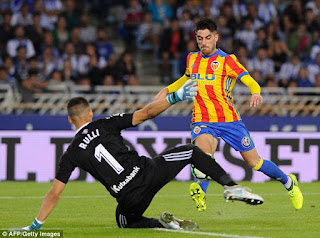 but the next game after that, at Betis killed him off as he was responsible for their second and third goals in a near comeback. Fingers crossed he'll be able to resurrect things in the Segunda.

Speaking of disappointments, Fran Villalba has joined Numancia on a season-long loan. Big things were expected of him a couple of years ago, but he fell off the radar after that.

Gonzalo Villar was expected to sign a new contract but instead he's left on a free transfer to Elche, though Valencia retain 80% of his rights and he'll play more games for them.

A deal to sell Maksimovic to Getafe seems done, with only official confirmation lacking. They'll pay 5 million for him, with Valencia having a buy-back option of 7.5 million, next summer, rising by 1 million in the two summers after that. Valencia have even agreed in advance on a contract for him should he return.