With Valencia coming into this game knowing that a win would take them into 3rd place above Real Madrid there was a little bit extra to play for knowing that Champions League is almost a certainty.

Valencia unbeaten in the league since the 1-0 defeat at Athletico Madrid over 2 months ago and only conceding 1 goal in the previous 5 games.  Espanol this year have beaten Real Madrid and Athletico Madrid and drawn with Barcelona so they can turn it on against the big clubs.

Valencia started slowly and Espanol were making chances early on.  Rodrigo broke the deadlock when connecting with a great cross from Guedes made no mistake to put the home side a goal up. Gerard Moreno though was a little unfortunate to be ruled offside to level the score soon after. 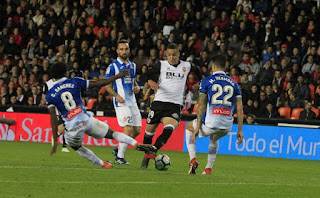 It wasn't the best spectacle for the slightly disappointing 36,300 spectators but there were many chances mostly against the Espanol goal where Pau Lopez was having the game of his life keeping out long shots from Valencia and keeping them in the game.

There were many mistakes from both sides and for long spells you could have been forgiven for doubting that Valencia were near the top of the league with their scrappy play.  However, we are not there just by luck and there was a lot of hard work from our players all over the pitch, closing down and preventing the visitors from getting too close to our goal.  A problem I noticed was how many silly free kicks we gave away in dangerous areas. Do that next week against Messi and things could turn very messy for us.

Kondogbia was having another great game and at times Guedes was showing signs of his early season form tearing into the Espanol defence.  The whole back line were coping well and often the Catalans were forced into playing the ball back to their keeper because they were pressurised and there was just no way through.


As normal when a team is winning by the one goal we were called to defend in the final minutes as Espanol poured forward hoping to snatch a late equaliser, but it was not to be and the fans went home again happy with the result if not exactly excited about the performance.

Neto 7   Was called on a number of times to make good saves and has answered yet again his critics to prove he is a top keeper
Montoya 6  Had a good solid game and again shown that the questions being asked about his ability have been unfounded.  Unlucky with a blistering long range shot that tested Lopez.
Gabriel  6  Solid performance again helping to keep another clean sheet. Again he has his critics but 1 goal against in 5 games speaks for itself.
Garay 6  Like Gabriel solid but made a couple of errors, luckily not leading to anything.
Gaya 7   One of his better games, full of running. At one stage he had a good shot blocked and when they broke away he was back making a sliding tackle in his own area.
Guedes 7  Getting back his old flare and making amazing runs at defenders. Made the goal for Rodrigo with a great cross.
Parejo 6  The usual Parejo making good passes and controlling the middle but looking a bit too lethargic at times and a bit too casual.
Soler 5  Too many mistakes for the local hero.  I do not know what is wrong with him at the moment although he did put a nice ball on the head of Rodrigo to nearly score. Maybe should have been replaced earlier by Pereira.
Kondogbia 8  Awesome game yet again, so strong and great vision for the pass. Unlucky with the booking after the ref allowed a free kick taken in the wrong place by Espanol.
Rodrigo 7  That man again getting his 5th goal in 5 games, amazing run of form. I said on here at the beginning of the season this would be his year and what a year it has been. Also he looks to have improved his overall game.
Zaza 5  Not a good game for him overall. I cannot recall too many chances but had one good shot well saved.
Subs
Pereira,  Mina and Torres not on long enough really to evaluate.
Posted by Micky Hunter at 12:21 PM
Email ThisBlogThis!Share to TwitterShare to FacebookShare to Pinterest
Labels: match report
Newer Post Older Post Home