The international break was a good one for Valencia, with Parejo finally realising his dream of playing for the Spain national side and Rodrigo staking an even better claim to play in the world cup, scoring Spain's only goal against Germany. The team usually does well after such breaks and continued that run today, scoring a hard fought win over their favourite whipping boys (played six, won six) Leganes in a scrappy game. 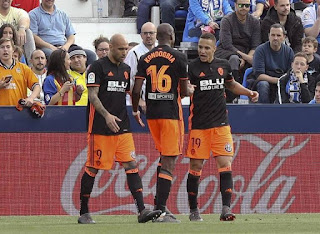 The team selections have been predictable this year. The only questions are usually who will play right back and who will partner Rodrigo up front. Vezo was preferred in the former role and Mina was judged not to be fully fit, so Zaza started again. The one surprise was Jaume starting only his second league game of the season (away to Sociedad was the other.)

Leganes have gained a reputation this season for being a tough side to break down and this was clear to see today. They played 5-4-1, defending solidly and denying Valencia space. For our part, our defence was also really well-drilled and organised. It was our attack that was a bit of a letdown. We never got going and it wasn't helped by Leganes committing a number of niggling fouls as soon as we crossed the halfway line.

In the 8th minute Zaza put us ahead. Rodrigo cut back nicely to Soler and his centre provided the Italian with a tap-in. In real time it did look offside, but the freeze frame on the replay showed that Soler had timed his run perfectly. Unfortunately, the linesman put his flag up. A shame for many reasons, a goal would have opened up the game nicely. As it was, the game after that was mostly a turgid affair. Lots of fouls from Leganes to break up the play, with Valencia eventually doing the same when it became clear that the referee wasn't going to produce any cards. Both goalkeepers could have brought a chair along as neither had much to do. Jaume was forced into his first save in the 30th minute and a few Valencia attacks broke down.

Half-time, little to write about. Next 15 minutes.... the same. A 0-0 draw looked a strong possibility until Valencia finally broke the deadlock in the 62nd minute. The Leganes player took too long on the ball, always a mistake when the machine Kondogbia is nearby. He stole the ball, Parejo toed it to Rodrigo and he took a touch outside the area and beat Cuellar with a low shot inside the near post. Valencia had just about edged the game and Leganes had looked toothless in attack, so it was probably fair.

There were only two real incidents after that. Jaume hadn't looked secure in the air the whole game, punching a few balls he should have caught when under no real pressure. He fluffed a cross and Leganes should have scored from a pull back, but Gaya blocked superbly. Late on, Leganes had a penalty shout when Pereira may have handled. It would have been harsh and the referee waved it away.

A dull game overall. Valencia do well against free flowing teams (like Betis) where we have space to counter-attack but we still have work to do on breaking down scrappy ten-men-behind-the-ball teams like this, where we often look uninspired. I'd have tried a few more shots from our midfielders, several of whom have an evil shot on them. Nevertheless, credit to the team which has 22 points from the last 24 and got a very important three points which takes us even closer to mathematically certain Champions league qualification, especially with both Sevilla and Villarreal dropping points to give us a monster 15-point lead. Overtaking the Madrid teams remains doable and the 77-point record as well: the team has the same number of points that Nuno had in 2014-15 and only one fewer than Benitez had in 2004 at the same stage.

PLAYER RATINGS
Jaume 4 - the weakest link at the back, never looked secure with aerial balls and punched when he should have collected
Vezo 6 - not a right back, but equipped himself well
Gabriel 6.5 - solid presence in defence and passed out well
Garay 6 - a good game, cutting out any danger before it developed
Gaya 6 - had a couple of key interventions, most notably near the end when he blocked a certain goal
Soler 5.5 - had a good assist ruled out but struggled overall against tough defence
Kondogbia 8 - player of the season would be between him and Rodrigo for me, always a dominant presence in the centre
Parejo 6 - struggled to get involved as he was tightly marked but passed well when he was involved
Guedes 5.5 - did well in the first half but faded after that, no surprise when he was replaced
Rodrigo 7.5 - was closed out for most of the game but made the difference when he had to. Having an excellent season.
Zaza 6.5 - had a goal incorrectly ruled out and worked hard as always

SUBS
Ferran 4.5 - barely noticed him after he came on
Vietto 5.5 - made an effort but no noticeable increase in quality and is clearly on the way out
Pereira N/A - overall similar to Vietto, has shown the odd flash of potential this season, but nowhere near enough for us to commit any significant amount into buying him
Posted by John Valenciacf at 7:40 PM
Email ThisBlogThis!Share to TwitterShare to FacebookShare to Pinterest
Labels: match report, player ratings, results
Newer Post Older Post Home