Another week, business as usual with a direct rival completely smashed. How high can this team go? At the start of the season most of us would have been happy with scraping into the Europa league places, now that would feel like a let down. I hoped for a win to nil in this game but never dreamt we'd win so convincingly. 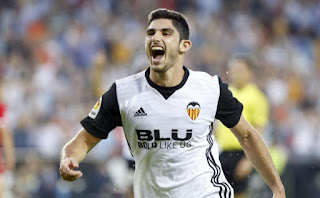 As ever Marcelino stuck with more or less the same line-up. Montoya replaced Vidal and Gabriel came back for Garay.

Most of the first period was goalless, with Valencia far superior. Our midfield was bossing their's, with Kondogbia a strong presence, Parejo orchestrating attacks and Soler and Guedes looking ever threatening on the wings. When Sevilla did manage to get forward our defence was solid, with Gabriel and Murillo very active in cutting out any danger, with Neto virtually a by-stander, but looking like a solid pair of hands when called upon. Valencia had several chances, few of them clear cut. Soler cut back to Zaza who was marked too tightly to get a shot off. Soler put in another decent cross but unfortunately poor communication between our players meant that Rodrigo scuffed an attempted overhead kick over when Gaya would have had a clear shot at goal. Rodrigo and Soler missed with attempted lobs from distance and a decent cross from Rodrigo just missed Guedes. Guedes was everywhere, at times I felt like checking the line-up to see if he had a twin brother playing.

0-0 looked Sevilla's best hope and even that went just before half time. On the counter Rodrigo produced an excellent flick on for Guedes and the latter provided another wonder goal, cutting inside 2 defenders before unleashing a powerful shot into the top corner from outside the area. And you thought his goal last week was good?

After last week's scare against Betis, Valencia didn't let complacency get in the way and came out all guns blazing. Soler shot well from outside the area but Rico managed to tip it away. Minutes later, Rodrigo produced another quality assist, setting up Zaza and the latter conjured up a good goal from a tight angle.

Sevilla tried to get back into it after that. Valencia had, unusually, had most of the possession but Sevilla started to even that out only to run into some solid defending. Neto made a good stop, and the back four were ever attentive, but a header wide was as good as it got for them. Mina had a very good penalty shout turned down when the defender seemed to put hands on him inside the box. He got his revenge moments later, with another assist from Guedes letting him slide it past the keeper.

Valencia weren't done. Kondogbia had a great pass to put Guedes away and the latter showed he can score just as well inside the box as outside it, finishing coolly for an excellent win. It's at this point I usually introduce a cautionary note of things that we could do better, just so we don't all get carried away, but I'm really struggling to find one. This was yet another excellent performance to end the first quarter of the season in style. It's early days but we must now be favourites for a top four finish.

PLAYER RATINGS
Neto 7 - surprisingly little to do but did it very well. Great signing.
Gaya 7.5 - solid in defence while linking up well with Guedes. Showing the quality that got him linked with Real Madrid in his first year.
Murillo 8 - two top games in a row. Handled Muriel like a boss, with great anticipation.
Gabriel 7.5 - a few questions were asked about him after the last game but he answered them with a confident defensive performance in this one.
Montoya 6.5 - quiet but effective game and covered his side well
Guedes 10 - I was pondering whether to give him full marks until he erased any doubts with that cool finish at the end. This guy is on a different level. It's a bittersweet experience seeing him playing this well knowing that every game like this increases his value to unaffordable levels for us, but for now, I'm glad we have him.
Parejo 7 - confident and controlled midfield performance, this season is a contender for his best with us.
Kondogbia 7 - always strong and reliable, lost possession a few times which reduced his rating but produced a killer assist at the end.
Soler 8.5 - very good game, a constant attacking threat and has adapted superbly to his new role on the right
Rodrigo 7 - the usual complaints about his finishing, especially on that chance where he was put in by G.G. and it's a shame his goalscoring run has come to an end. Despite that, this was a quality performance, with two classy assists.
Zaza 7 - his passing at times can be a let down but a really good goal to continue his streak. Fun fact: he has now scored the same number of goals this season as his former club West Ham have managed in total. He must enjoy having the last laugh.

SUBS
Pereira and Lato - barely noticed them, so no rating
Mina 6.5 - while the other two forwards are getting the plaudits, he's been beavering away and having a decent season, with his third goal. Should have the Copa game to show what he can do for the full 90.
Posted by John Valenciacf at 9:23 PM
Email ThisBlogThis!Share to TwitterShare to FacebookShare to Pinterest
Labels: match report, player ratings
Newer Post Older Post Home