Forgive me if I don't go deeply into tactical formations I will leave that to others more qualified. To me football is about entertainment, passion, tension, highs, lows, goals, near misses, controversy and much more.
Last night we had everything all in 93 minutes. On paper it was always going to be a difficult test for us with Betis at home with a very partisan crowd of 48,000 supporters and doing very well in the league just behind us.
Strange to see Barragan and Guadardo lined up against us and both would have a say in how the game played out in different ways. 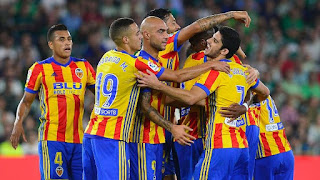 Kondogbia gets the ball rolling powering in a great header from a Parejo corner leaving the defenders and keeper no chance. Wow a goal for Valencia from a corner.
A minute before the break Gaya puts over a lovely cross to the back post and Soler was unlucky with a powerful volley which the keeper saved well. however the ball found its way to Guedes well out side the area who made himself some space to fire in the top corner for the goal of the weekend.  We were very unlucky to have a penalty claim turned down when Soler was fouled in the box but we are used to that by now.  Half time 0_2 and we are coasting it.

In the second half the inevitable happens, a cross from the right bounces up off the grass or possibly Zaza and glances the arm of Kondogbia.  We all know what is going to happen and of course the ref pleases the home crowd by giving them a penalty. There is a god after all and Neto makes a great or fortunate save with his feet and we are still 2 goals in front.

On 63 mins yet another corner by Parejo is easily nodded in by that man Rodrigo to make it his 6th goal in 6 consecutive games and make the score an unbelievable 0-3. Can it get any better.

On 73 mins a long ball down the line from Gaya, who was perhaps a little lucky not to have been pulled up for the use of his hand, found Santi Mina, who had replace Rodrigo. Mina always looks a bit uncomfortable running at goal but he managed to get in a shot which fortunately spun up off a defender before dropping into the net. 0-4 home and dry, what could possibly go wrong now ?

Murillo was replaced by Paulista, Soler by Andreas and Rodrigo by Mina.  This is when things started to go a bit wrong. On 78 mins a suicidal pass from Paulista to Parejo resulted in Parejo making a ridiculous short pass back, the ball was easily intercepted and its 1-4. No problem, still 3 goals in front. Many Betis supporters will have missed this as they were heading for the exits and there were many empty seats by now.  If there is one thing that I have learned from watching football, its not over till its over. 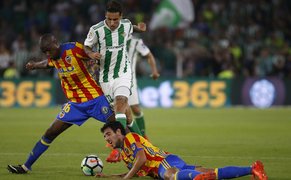 A minute later Vidal was slow coming out to play Sanabria onside and he calmly slides the ball past Neto and suddenly our arses are twitching.  At this stage anything looked possible as Valencia were all over the place and lost all the concentration. OK ref we will settle for that 2-4, blow the whistle and we can all go home.

No that isn't going to happen, Joel Cambell makes a good run down the right beating Paulista and puts over a cross for Tello to punish Valencia and all the Betis fans leaving to visit local bars. 3-4

They think it's all over but it's not.  Kondogbia wins a good ball and plays it forward. The ball reaches Zaza and he makes no mistake to finally kill off Betis, although seems to have injured himself in the process.

If the game ended now I think we would have no complaints as we have all had our monies worth of drama and excitement. However, Guedes makes a great tackle in his own area and charges the length of the pitch. He passes to Pereira on the left who at first seemed to have missed his chance. He manages to balance himself before firing an unstoppable shot into the top corner to finish an amazing game. Has to be one of the best games I have seen for a long time if for ever.

Neto 6  Not much chance with the goals after being so exposed but made some fine saves including the penalty.

Vidal 5.5 Made some good tackles but was caught out a few times. Good experience for him with such a pressure game.

Parejo 6.5  Gave away a goal but was involved in good forward play and worked hard. S typical Parejo performance.

Guedes 8   For me the man of the match, super goal and super run at the end even though his legs looked tired. Involved in all the good spells.

Kondogbia 7  Good strong performance and great goal. Unlucky with the penalty. Does what he is paid to do and does it well.

Rodrigo 7  I tipped at the start of the season that this would be his year and he is proving it with his 6th goal in as many games.

Zaza 6.5  Worked hard as usual but obviously not fully funcioning with his recent injury, great goal at the end.

Subs:
Pereira  Great goal but he lacks that extra when it comes to defending. A number of times when we needed him to win tackles he was found wanting. Maybe not the right player to bring on at that time.
Although one of the two subs to score and make the game safe

Paulista  Not on for long but struggled to get to pace with the game and at fault for some of the nervy moments in the final spell. Why he passed to Parejo to give away the goal only he will know that.

Mina.  A little fortunate with the goal but always runs his legs off for the team. His goal helped to make the game safe.
Posted by Micky Hunter at 12:41 PM
Email ThisBlogThis!Share to TwitterShare to FacebookShare to Pinterest
Labels: match report
Newer Post Older Post Home