The Valencia juggernaut rolls on, even if the team was a bit off-colour today, securing 3 points from a hard-fought game against a surprisingly tricky Alaves, who had lost 8 of their first nine games, thanks to goals from Zaza and a penalty from Rodrigo. 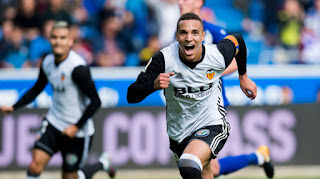 While Marcelino reversed the substantial rotation that he'd done for the Copa game, there was little surprise in that. Maybe the only mild surprise was the selection of Gabriel for the third game running, rather than Murillo, who had rested in midweek and had had a good previous game. With Parejo suspended, Soler shifted back into the middle with Pereira starting on the wing.

Alaves clearly set up to frustrate Valencia and did it well. Playing 5-4-1, crowding the midfield and having the odd opportunity. For most of the game it was effective. Valencia were unable to hit their stride, there were no counters possible against a team which sat in their own half for most of the first period. That's not to say that they didn't cause us problems. Pedraza gave Montoya a tough time on the wing and created one of their best chances in the 10th minute with Neto having to save with his feet. Valencia were struggling to create any real openings with Alaves edging things. We saw again how key the Parejo-Kondogbia axis is to the whole team, as when one of them is missing, things usually go below average.

So it was slightly against the run of play when we took the lead. Montoya pressured the defender in the corner of the field and Pereira blocked an ineffective clearance. He then cut back to Zaza. It was only a half chance, but the big man took it well and, on his weaker right foot, blasted it past the keeper at the near post. In the 42nd minute, Valencia had what was for this game a rare counter-attack. Guedes, who was struggling to get into the game, had Rodrigo and Zaza available but overhit his pass. Valencia would have been happy to go in at half time leading in what had been a surprisingly even game.

After the restart, our ex-loanee Munir looked to be through on goal, but Gabriel made a crucial last ditch tackle. Sadly, it was in vain as poor defending from the resulting corner in the 48th minute allowed them to equalise. Bad time to concede. Alaves had their heads up and gave us real trouble in the second half. In the 53rd minute Munir hit a free kick well, forcing Neto into a super save low down.

With Alaves continuing to adopt a defence in numbers approach, it took a penalty to break them. The defender inexplicably waving his arms around as a good cross from Pereira came in for Rodrigo to convert the resulting penalty. There were some nervy moments after that, especially when Neto looked to have got injured in the 70th minute and Jaume started warming up. Luckily, Neto was able to finish the game. Alaves brought on Bojan for Munir and he caused us some trouble but ultimately we were able to hold on for the win which guarantees us second place after this round of fixtures.

After some classy performances, this one was a grind. Valencia do well against teams which play open football but, as we saw in this game and the cup, we can struggle to break down teams which play defensively. Also, while defence from open play remains good, we need to work on defending corners.

Still, that makes this team only the fifth in Valencia's history to win 6 consecutive league games (7 in a row counting the cup.) This is our best 10-game start to the season ever. In the Sevilla game, Zaza had become only the seventh player in Valencia's history to score in 5 consecutive games, joining a list of Valencia legends like Waldo, Kempes, Cabillo and *cough* Rodrigo Moreno. He now equals Carlos Diarte's record (from 1976-77) of scoring in six consecutive games and will equal the all-time record (from 1943-44) of Mundo if he can score against Leganes next week. No pressure Simone, just imagine you're taking a penalty...

I'll leave you with Marcelino's words from the post-match press conference: "If you had told me when I took over in May that we would be in this position I wouldn't have believed it. We've tried to do things correctly from the start, we have a great squad on a professional and human level. We never imagined having this many points and being unbeaten after 10 games, especially when we saw the fixture list. We're in a situation we couldn't have predicted but which we deserve to be in"

PLAYER RATINGS
Neto 6.5 - a safe pair of hands as always, great save from the free kick to prevent a certain goal
Gaya 6 - good defensive performance
Gabriel 6.5 - made a key tackle to keep us in it, had a good day
Garay 6 - made several headers to provide us with the aerial power that they couldn't match
Montoya 5 - not having the best of seasons, had real trouble at the back but redeemed himself with contributions in attack
Guedes 5 - didn't help that he was fouled multiple times, but really had an off-day and was the first to be subbed off
Kondogbia 6.5 - solid cover for the defence as usual
Soler 5.5 - the decision to shift him to a wide role looked suspect, but weirdly, he seems to do better there than in the centre.
Pereira 6.5 - after being ineffective in midweek, produced a really good game, with involvement in both goals
Zaza 6.5 - didn't have a lot of service to work with but scored a great goal from nothing
Rodrigo 7 - has been my man of the match for 2 games running, active and always a threat, no surprise that his contract looks to be extended