Valencia's opponents in the last 32 of the Copa Del Rey were drawn today. Our possible opponents were the La Liga sides not playing in European competitions and the five remaining Segunda Division sides, 4 of them in promotion or play-off positions with the exception Zaragoza, who are 18th and just outside the relegation positions. We got Zaragoza and therefore have potentially the easiest draw possible. Both clubs have history, Zaragoza bought Aimar and Ayala from us in 2006 but are in one of their worst periods historically. When the club got relegated from the top flight in 2013, they'd spent 53 of the previous 57 seasons in the top division but have yet to return and are now even flirting with dropping to the third level. I visited the Zaragoza stadium just last month, it's big enough, holding nearly 35,000 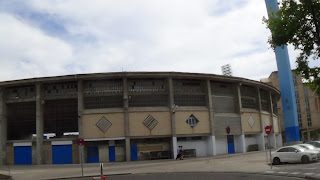 and the club has consistently had the best attendances in the division, averaging 15000-16000 so the atmosphere should be good but over 2 legs we should have no trouble. The first leg should be played around 25 October in La Romareda and the second at Mestalla around 29 November.

Jose Alesanco was sacked as Valencia's sporting director last week. Alesanco had been appointed by outgoing President Lay Hoon back in February but like his predecessor, Garcia Pitarch, didn't really seem to do a lot. In recent times President Alemany and Marcelino have been the driving forces behind any transfers, so Alesanco was increasingly looking like the third wheel on the bicycle. Alemany said yesterday that no replacement sporting director will be appointed and that he and Marcelino will assume responsibility for transfers. He also said that there will be money available for transfers in January.

On to bad news. Javi Jimenez suffered a serious injury last week and will be out for 6 to 8 months. Jimenez got off to a bad start with the first team, suffering a poor performance in the Copa games in January against Celta, but has grown since then and had a good pre-season. With Marcelino keen on giving young players games, he'd probably have featured for the first team sooner rather than later. The knock-on effect of this is that Valencia's plan to sell Vezo in January must now be put on hold. Vezo is expected back from his injury about 5 weeks from now and should therefore have the rest of the season to prove his worth.

UEFA confirmed this week that the top four from Spain will now gain direct entry to the Champions league. Previously, the fourth team had to go through a potentially tricky final qualifying round tie, as Valencia had to do when we last qualified as the fourth team in 2015. Now, fourth will guarantee us a place in the group stage.

In UEFA competitions tonight, Bilbao, who we will play at the weekend, put out most of their first team and suffered a surprise home defeat against Ukrainian side Zorya Luhansk. That means that, after a good start to the season, Bilbao have now gone five games without a win, obviously good news for us.

Less good news from the UEFA side, though, is that us and Villarreal are under UEFA investigation due to suspicions of breaking their rules on signing underage players. Hopefully we'll be cleared as the punishments are no joke, a potential fine and/or ban on signing new players as has already happened to Barcelona and Atletico Madrid.
Posted by John Valenciacf at 8:57 PM
Email ThisBlogThis!Share to TwitterShare to FacebookShare to Pinterest
Labels: news, Players
Newer Post Older Post Home