After 3 seasons without a shirt sponsor, Valencia signed a one-year deal with American telecommunications company BLU this week. While the exact figures haven't been released, most sources put the figure at €3.2m for the season. This is far less than the club was hoping for in previous seasons, but Valencia's brand has been diminished by 2 poor seasons and waiting around for the higher figure wasn't helping. Better to get something rather than nothing and build from there has presumably been the club's thinking.

As is usual with these kit launches, the players chosen give an insight into the club's transfer thinking for the summer. The first features 5 academy graduates plus Rodrigo

This is a positive sign, showing how the club values its homegrown players.

with Zaza and Nani the newbies.

with Mina and Montoya now the new ones featured. As Soler, Rodrigo and Gaya feature in all three, it's safe to say that the club has no intention of letting them leave, while Nani and Zaza also don't appear to be going anywhere and Mina is more likely to be staying put.

Also of interest is the players not featured, with none of the three club captains appearing. The choice of reserve goalkeeper Sivera rather than Alves would tend to suggest that Diego may be on his way out, while Parejo's future may be up in the air.

With all that said, it's worth noting that things can easily change. Here was last year's photo.... 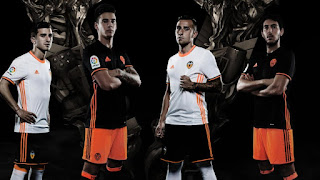 so appearing in the promo photos is no guarantee, but unless we get big offers for the players in this year's, most of them should still be around.

Transfer rumours have been going overdrive this year and it's hard to know how seriously to take the rumours of the multiple players we are linked with. The most serious ones seem to be the club's attempts to retain Mangala, which looks unlikely to happen, and to sign Luciano Vietto or more accurately, take him on loan with a buy option.

----------------
Valencia B marched on at the weekend, beating Celta B 3-1 in the play-off quarter finals to secure a 6-3 aggregate victory. The full game of the first leg is at this link and the highlights of the second leg at this link. The second link is definitely worth a watch, with great team play and some super moments, including Rafa Mir nearly scoring from the halfway line. The play-offs only have an open draw if necessary, the rules are that teams that finish first play teams that finished fourth and if that's not possible, third. Also, subject to those rules, match-ups between teams that played in the same Segunda B group are avoided. For the semi-finals, that produced....

With the first leg at the Mestalla on Sunday 4 June and the second leg a week later. The above rules mean that if we win, we can't play Balerares or Barca in the final.
Posted by John Valenciacf at 7:07 PM
Email ThisBlogThis!Share to TwitterShare to FacebookShare to Pinterest
Labels: news
Newer Post Older Post Home