It's another hard fought win from Voro's boys, what a great caretaker that man is. 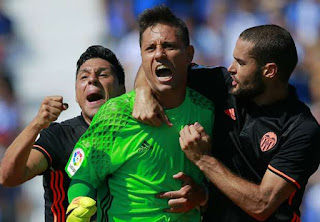 As with the Alaves game, it didn't come without its fair share of drama, controversy and perhaps, sheer luck. Little happened in the first 15 minutes. Neither team threatened and Enzo picked up yet another silly booking for retaliating against a guy who had fouled him earlier. Leganes' tactic was clearly to play high intensity football, not allow us time to settle and they seem to have identified our right back position as the weakest link as they were targeting that. Sure enough, they took the lead on 21 minutes and it came, indirectly, a result of defensive mix-ups. A couple of minutes earlier, a dangerous attack had developed, with Mangala and Alves both chasing the ball. Poor communication between the two resulted in Alves slamming his attempted clearance into Mangala's face. With Mangala stunned and off the field for treatment, Leganes took advantage of our shortage in defence, swung in a cross and scored.

As in the previous game, the goal seemed to galvanise us and a nice move between Montoya and Cancelo shortly after provided a chance for Nani and Rodrigo, but both were beaten to the ball by the Leganes defence. They'd have their revenge shortly after. An awful back pass from a Leganes player was well chased down by Rodrigo. The goalkeeper looked to have got there first but Rodrigo was committed, knocked the ball out of the keeper's hands and Nani finished well. 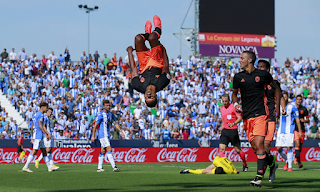 There was controversy about the goal, yes it was a foul on the keeper, but I think many missed an important point: the keeper shouldn't have been handling a backpass at all. Usually, denying a clear goalscoring opportunity like that in the penalty area would result in a sending off and a penalty, but due to a loophole in the rules, if Rodrigo had jumped over the keeper, all that would have happened would have been a yellow card for the keeper and an indirect free kick, which Leganes would almost certainly have crowded out. So, in a way, justice was done.

Valencia continued to dominate the game. Possession had been 60/40 in Leganes favour when they scored and by the end of the half it was all Valencia. Nani had been anonymous in the first 25 minutes, but now he was everywhere. Rodrigo was making decent runs and Cancelo and Montoya were threatening down the right.

When the second half started, a number of Leganes players were clearly poking Enzo, obviously trying to get him to react and get a second yellow. Fortunately, he kept his cool. In the 52nd minute, we got the goal that our play deserved. From a corner, Nani cut inside well and put in a dangerous cross, which Suarez poked in, for what would turn out to be the winner.

I'd like to say it was comfortable from then on, but that would be far from the truth. Leganes missed a couple of good opportunities which a better side would have finished more clinically.

In the 65th minute, Alves showed his main strength and weakness. Flapping at a cross and then getting tangled with a Leganes player, with the ref pointing to the penalty spot. The decision looked very questionable, almost like the ref was trying to balance things out after the iffy decision making around our first goal. Step up the penalty legend again, as Alves saved his 17th penalty out of 35 he's faced, to break the record held by Zubizaretta (another former Valencia keeper.)

After that there was some shaky defending on both sides, with Parejo, Gaya and Nani all having chances to put the game to bed for us. Towards the end, Voro brought on Abdennour for Rodrigo to close things down and Bakkali in injury time, just to waste a bit of time. The tactics worked and Valencia now climb to 14th.

In conclusion, the team looked better overall than the previous game, though still with issues: missing chances up front and looking suspect at the back, though this was one game where I felt the midfield did do their job for a change. We're still far from out of the woods. Better teams than Leganes would have beaten us on today's display and this stage, we really would've needed to be on at least 13 points if we had serious champs league ambitions. All we can do is keep winning, as top 6 is still doable.

Player ratings
Diego 6 - we definitely saw the best and worst of him in this game. Very suspect with crosses and corners and not that good with distribution, but made a couple of key stops, especially the penalty.
Gaya 5.5 - saw less of him in attack in this game, mostly confined to a defensive role, which he largely covered.
Mangala 5- average game, looks like he's still finding his feet in the team and poor communication with the keeper led indirectly to the goal. Does add physicality and an aerial presence, though.
Santos 5 - largely did his job, but could have done better for the goal
Montoya 5 - caught out for the goal, though in fairness, we were a man down
Suarez 6 - much better game than before and good to see him score
Enzo 6.5 - generally had a decent game, but needs to rein in his temper, else we'll see more red cards for him this season
Parejo 6.5 - Mostly solid game I thought, was passing well for the most part
Cancelo 6 - is far better off as a winger than a defender, but needs to be better with the crosses
Rodrigo 6 - ran his heart out, but needs to put his chances away
Nani 7 - was invisible for the first quarter of the game but was lively after that. Needs to play that was more often.

Subs:
Munir 4 - in fairness, was brought on when the team was leading and was in a defensive mindset, but needs to do better than this if he doesn't want to be 6th choice striker at Barca next season
Abdennour N/A - not enough time.
Bakkali N/A - deserves more game time

Voro 8 - Got it right again. Unlikely he'll be given the job, but can return to his day job with his head held high.