Valencia CF bounced back after the demoralizing 3-0 loss at the hands of Atletic Bilbao and barely squeezed a tight 2-1 win over Malaga CF in mid week, but a win is a win and Valencia CF would take it. Now the team has to up their game, they are facing Atletico Madrid the second team on the table who've been doing great this season. They are playing compact and aggressive football, they are a well organized team and have strong midfield and defense.

The only potential weakness for Atletico Madrid is that they don't generally score a lot of goals, most of their wins have been small, usually 1 goal wins, so if a team can minimize their chances and defend really well its possible to beat them. Their top goalscorer is Antoine Griezman with 14 goals, Fernando Torres is second with only 4 goals, so if Valencia CF can shut down Griezman they stand a chance to beating Atletico Madrid.

Defensively Atletico Madrid are really good, their central defensive pair have been playing together for a long time and overall their defense is really interlinked and defensing as a unit, but if they get caught out of position or if their is a quick counter attack they can be vulnerable as has been shown in the past. Valencia's chances would need to come through quick, but precise counter attacks in which our attackers would need to be really accurate and score with even the slightest chance. They can't afford the kind of misses they've been having. 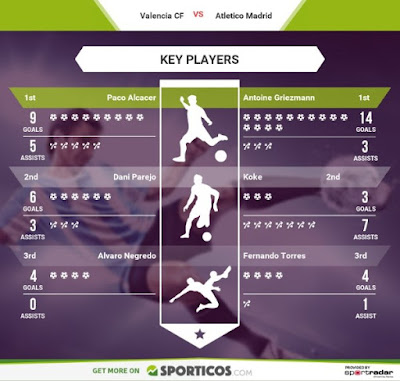 Valencia CF coach Gary Neville has been withholding the squad list basically until hours before the matches in recent times, so once again we don't have a list of which players are going to be featuring. Of course since most are fit and available, I'd assume its pretty much the same list from the last match.

So I'm expecting to see a similar squad to the one that played against Malaga, with maybe one or two changes. Enzo Perez is once again ready to play, but considering his situation with injuries I think he is just going to be left on the bench, maybe give him some time as a substitute in the second half if there is a need for it.