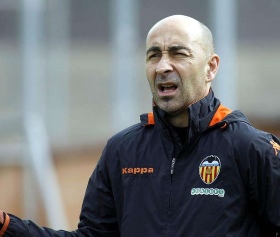 Pako Ayestarán is going to join Valencia CF coaching staff, he will not be replacing anyone of the coaching stuff, he will just be an additional staff focusing on the physical training of the players.

He's also tried to coach himself as well with mixed results at best and he's been out of work for several months now after he was sacked as manager of Santos Laguna. He joins Gary Neville's coaching team and will look to improve the players physical condition and stamina, something which many of the players have been lacking.
Posted by SlickR at 1:08 AM
Email ThisBlogThis!Share to TwitterShare to FacebookShare to Pinterest
Labels: news
Newer Post Older Post Home