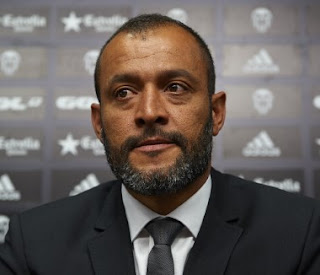 Nuno Espirito Santo left Valencia CF on a low, but his tenure at Valencia CF wasn't all that bad as he lead the youngest team in La Liga to 4th place finish last season, securing the coveted Champions league spot that is crucial for a team like Valencia CF in both sporting and financial terms.

He arrived last season after Peter Lim bought the club and wanted to start fresh with a coach he personally trusted and with whom he had close relationship. Since Peter Lim and Jorge Mendes are close friend and Jorge and Nuno are very close friends as well, it was only natural for Nuno to become coach, even though he was a very inexperienced coach and a big unknown.

Peter Lim brought several new players and tasked to coach of making this new young group of players work, with the objective being Champions league football at the end of the season. Nuno did experiment the first few matches, but he very quickly settled on an established starting eleven team as the team was getting great results from start. Paco Alcacer was cemented as the main striker due to Negredo's injury and the forward trio of Paco, Rodrigo and Piatti worked wonders.

Nuno Santo obviously got quite lucky with the in form Jose Luis Gaya who's tireless runs from defense to attack and back were thing of wonder, contributing all over the pitch in immense ways. He was allowed to have this freedom by the rock solid Otamendi who covered with ease at the back and made short work of any potential counter attacks.

Nuno Santo focused on the counter attacking aspects of the play as he didn't have the most dominant midfield and he knew what he wanted, he knew his players strengths and played to them. The team would defend meticulously and when given the opportunity would start these super fast counter attacks with Piatti on the left who could outrun the opposition and Moreno on the right who could dribble past the opposition and Paco who always positioned well and got to the passes and crosses that were made towards him.
This style of play made Valencia CF extremely hard to beat as the defense seemed impenetrable and even the slightest mistake by the opposition could get punished. In fact Valencia CF has the biggest chance to goal ration in the league and in western Europe, scoring more goals with fewer chances than any other team in the big leagues.

Some of Nuno's accomplishments last season were the 3-1 victory at home over Atletico Madrid, the 2-1 win over Real Madrid who went undefeated for a record number of games before that, the 3-1 win over Sevilla at home and the draw against Real Madrid towards the end of the season. Ultimately his biggest accomplishment was leading this team full of new and young players who hadn't played with each other before and weren't really experienced and leading them to 4th position that led to Champions league football.

The second season for Nuno Espirito Santo kind of started in a bad light for Nuno, he didn't have to have any bad results for some of the Spanish Valencia CF fans to turn against him as they saw him as the main culprit that had Rufete and Amadeo Salvo leave the club. As some of you know and remember there was a big issue with some of the transfers and the perceived issues between the sporting director and some of the reinforcement decisions, which the fans took as Nuno's dealings since he was best friends with Jorge Mendes, Nuno's the coach and so he has to be pulling the strings on who gets to come.
Whether any of this is true and what really happened is completely unknown, we don't even know if there was bad blood between any of the parties and I'm of the train of thought that it was Peter Lim who was making all of the decisions, which he surely considered the best decisions, thus making them in the first place.

I think the hate towards Nuno that started in the summer from the perceived political and sporting issues in the club was unfounded. First of all even if there was issues about the transfers it was probably overblown way out of proportion, especially by the garbage Spanish sporting media who's one and only focus is to sell papers and/or get pageviews, so bombastic and controversial headlines is good for business. Even Valencia's sporting media superdeporte is 100% focused on views and profits, so the truth and level headed analysis can take a back seat for them.

But lets say nothing was overblown and that it was a major issue and that it was really bad, why would Nuno be the main culprit? He doesn't sign off on the transfers, he doesn't control the bank accounts, he doesn't negotiate with the players and teams! The only thing he can be blamed for is possibly working closely with his close friend and agent to suggest players to the management of the club, after then, with Rufete and Salvo gone it was up to Hoon and ultimately Peter Lim to make the decisions. Does this make Peter Lim a bad guy, is Peter Lim self hating and want to make it worse on his own investment? Absolutely not, I recommend reading my interview that I did with Daniel Owen about the transfer dealings and where I think Peter Lim was coming from on some of the decisions!

So with all of that Nuno's career at Valencia CF was doomed. The results are ultimately was finished him, but they were not what started this. Even when Valencia CF beat AS Monaco to continue to the Champuions League group stage a group of Spanish fans were calling for him to resign and booing the coach.

So it didn't take much for half of the fans to turn against him after a few poor results, if he was hated and booed before the season even started, few poor results are certainly going to make the issue big and prominent. One thing leads to another and hearing the fans boo you every game, regardless of results at some point can affect any person negatively and can affect Nuno's coaching abilities. When you feel like everyone is against you, you tend to form a shell around yourself, becoming angrier and closed up, so its no wonder that he started falling out with some of the players after the results weren't that great.

If I was being booed and attacked all the time, even if it was at first a minority of fans I'd get the hell away from there as soon as possible, not as a sign of cowardice, but as a sign that I don't want to have anything to do with people like that!

Was Nuno Santo skilled enough to lead Valencia CF, was he the right guy for the job? There are two tales about that, one is his first season in the club which was extremely successful and one is his second season at the club which is relatively unsuccessful. I still don't think in terms of raw data, in terms of points on the table and our standing that we are in a bad position, we are only 5 points away from Celta who are currently 4th position on the table, 8 points behind 3rd placed Real Madrid. So clearly in terms of numbers we are still in a good sporting position.

From a sporting position I think we are in a bad position, last season Valencia CF had a style, had a strategy and they played it to perfection. This season the team has no style, has no strategy and the execution of any of the different styles has been rather weak. The team doesn't create a lot of chances, something that rang true last season as well, but last season we conceded way less goals and tend to score at one point over 80% of a chance. So basically 1 chances pretty much equaled 1 goal for us, this season it takes us 7-8 chances and often times more to score even one goal.

Ultimately I think Nuno's stay at Valencia CF can't be judged as a whole, it can only be judged as two halves, two stories, one which was last season and one which is this season. Last season was a very successful one and this season a not so successful one. I think him resigning makes sense and is the right thing for him and Valencia CF, though I dread how it all started.

I dread that some Spanish fans could go so low as to boo him in the preseason presentation over perceived issues, something which I explain in this editorial how its all overblown out of proportion by the Spanish media who sole goal is to sell papers/ads. Something which even if 100% true, he has some control over, but is ultimately a very small part of the club operations and the fact that he got no respect for leading the team to 4th place last season even if he is guilty as charged!

I think emotions tend to ran rampant and reason and logic tend to take a back seat to it. It feels better to act on emotion, to let loose, after all its human nature.
Posted by SlickR at 2:15 AM
Email ThisBlogThis!Share to TwitterShare to FacebookShare to Pinterest
Labels: editorial
Newer Post Older Post Home