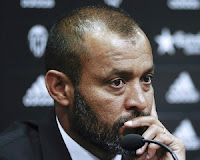 Nuno Espirito Santo resigns as Valencia CF coach following the defeat to Sevilla FC earlier tonight! The coach met with Peter Lim about a week ago and he was given few more matches to improve Valencia's standing in the table and tonight was supposed to be one of those matches, where a win would have been very important and a draw prolonging his stay under pressure.

After the loss though the coach has decided to resign amidst growing pressure from fans and club officials. Peter Lim now needs to find a replacement for him really quickly with limited options at this time!
Posted by SlickR at 12:25 AM
Email ThisBlogThis!Share to TwitterShare to FacebookShare to Pinterest
Labels: news
Newer Post Older Post Home