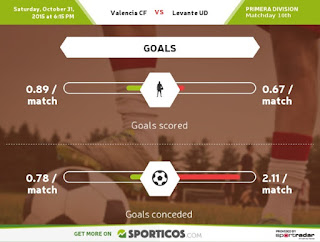 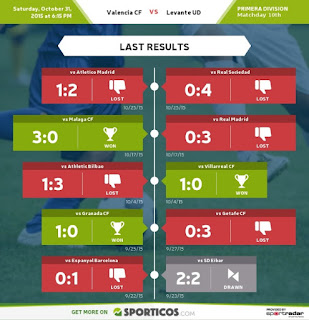 Valencia CF is currently 9th position on the table with only 12 points from a possible 27 from 9 matches. Some of the results have been reasonable like the last week's loss to Atletico Madrid, though last season we won the first game and drew the second game, but its understandable to lose to a very good team, but other results like the big loss to Bilbao, like the missed points against Espanyol, etc... are less reasonable and paint a troubling picture.

We are still early in the season and the league is most certainly a lot stronger than last season, overall all of the teams are closer in terms of performance and we see this in the table, more teams are clumped up and the difference even against the leaders is still relatively small. That said Valencia CF can't afford more bad results and more mishaps and the team needs to look to win even against teams like Atletico Madrid, small loss even on an away trip shouldn't satisfy anyone, at least we need to see draws in these key matches that slowly inch us forward.

In other matches against weaker teams we need definite wins and we need to secure these matches early and with better scores, our teams just hasn't been firing on all cylinders in any position, whether it be defense, midfield or attack. While at times the play has been better, it hasn't usually lasted.

Valencia CF coach Nuno Santo decided to omit Alvaro Negredo and Rodrigo De Paul once again from the squad even though they are fully fit and its more than clear that he doesn't count on them and the team will be looking to offload them in the winter transfer market. Negredo arrived to Valencia CF as a huge addition, someone to make Valencia CF a top team and guarantee goals, but he's been a shadow of his former self, in fact his offensive contributions are weaker than some of the central defenders who've scored more goals than him and while he hasn't had too much chances, he hasn't created anything for himself, at Sevilla he used to create chances for himself, if not cause so much havoc in the opposition defense that it would create spaces and openings for his team mates to create goal scoring opportunities, but at Valencia CF we haven't seen that.

Anyways its clear that some players are going to be leaving soon if there are offers for them of course and Peter Lim plans to invest around 100 million euros in the winter transfer market to strengthen the team.

I think some of the blame has to be attributed to Nuno Santo though, he's had one tactic last season and that is play counter attacking football all the time. He relied on our great defense with Otamendi and Mustafi last season to not concede goals, play a defensive football deep into our own half and rely on individual talent on our forwards to score. This obviously worked really well since Valencia CF were kind of the underdogs last season, no one was really focusing on us and studying our play, but you can't keep on playing the same exact style year after year and this year we've been caught in this position where we only know counter attacking football, but teams have figured us out we can't be effective as we were last season, so we are forced to play different style of football, but don't know how and we end up dropping points.