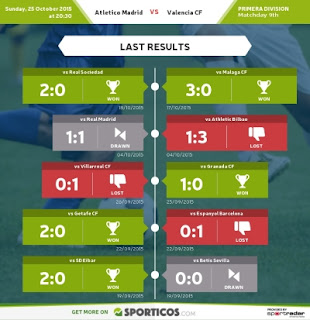 Valencia CF achieved an important win over Gent in the Champions league and that puts the team in a good position to qualify for the next round if they beat Gent again and Lyon loses to Zenit. Gent proved a lot tougher than expected and Valencia CF barely scrapped a win in total, even though the team had several great chances in the first half, not being precise in front of goal has hurt the team. 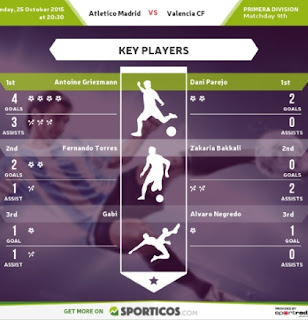 Anyways the team focus will be shifted to the Spanish league again and this time its a really tough trip to Vicente Calderon where Valencia CF will face off against the in form Atletico Madrid who are playing some superb football this season and their strength is reflected in the table where they have 16 points and will be looking to make it 19 points and keep up with the top teams in the fight for the championship.

Atletico Madrid have stayed mostly the same from last season, few players left, but in my assessment even better ones arrived and with Diego Simeone at the help he is going to get the best out of any player. Their core team is absolutely the same and these players have been playing together for several years now, they know the system, the tactics, the play style and they are able to win in the toughest of situations.

Valencia CF has been more of a letdown this season compared to last, technically the team "improved" in the summer transfer market since essentially none of the core players left, only Otamendi which was a big loss, but we've brought in defensive reinforcements and the defense was the least problematic area from last season. Even with the core team still in place and some new reinforcements the team has started a lot slower than last season and losing points in some crucial early matches against significantly weaker opposition, teams just promoted to the league and so on.

One would think with the second season with the same coach and core players and having a lot of talented players at disposal the team would be performing better, but that has not been the case and the team is yet to fully click together. Admittedly the league is a bit tougher this season than last and we are seeing a more compact table with teams relatively close to each other in the points, another bonus is that Barcelona haven't been really strong, I've watched few of their matches and they do seem quite weaker from last season, while the small teams are also stepping up and fighting back against Real Madrid and Barcelona.

I haven't been able to write any news articles, though I wish I would of, since there is so much news and for one Peterm Lim wants to inject around 100 million euros into the club for winter reinforcements, he's seen the team struggling a bit this season and wants the team to have the best chance of qualifying against for the Champions league so he is planning a big reshufle in the winter transfer market.

Some of the players that are on the exit door are goalkeeper Yoel, he hasn't been able to find a spot in the team for over a year and a half now and with him even losing out against Jaume, the team wants to sell him. Another players who hasn't convinced and the coach has deemed surplus to requirements in Rodrigo De Paul, he hasn't features in a match for quite a while now and the coach just doesn't really trust him, he is going to be sold in the winter.

Another player that might leave if there is a good replacement found is Danilo Barbosa, he came in on a loan deal from SC Braga, but has so far failed to impress the coach and doesn't provide good enough cover for Javi Fuego who is still the undisputed starter. Another player that might leave in Alvaro Negredo, he came in as a big reinforcement, the coach even called him "the bomb" when talking about a new reinforcement, but he's turned out to be a complete disappointment. With only 1 goal in the league he has been disappointing, last season he had the excuse of coming back from a long term injury and obviously needing a lot of time to get fit, settle down and get in form, but this season there is no such excuse.
Valencia CF coach Nuno wants to bring in a more tactical player, one that runs channels and one that can make things happen on his own and one that is basically different than the poaching style of Paco.

I'll write more about the possible new arrivals in news articles after the match against Atletico Madrid, which I'm 95% sure I'll watch and write down a report of it as soon as the match ends.

Result Prediction:
Atletico Madrid 1-0 Valencia CF
I think Nuno is going to focus on defense in this game, he knows he won't be able to outplay Atletico Madrid especially at their own stadium and he knows how dangerous they are from counters and those scrappy opportunities so he'll want the team to be really disciplined and meticulous, slowly building up play from the back and not losing the ball in midfield, Atletico Madrid are a team that is also really rigid and defensively compact so I don't expect a lot of goals. I think we are going to see mostly counter attack from both teams and I think the key to winning would be capitalizing on mistakes the opposition makes. I think overall Atletico Madrid are better at getting something out of scrappy situations and they'll win minimally over Valencia CF by 1 goal to 0.
Posted by SlickR at 9:49 PM
Email ThisBlogThis!Share to TwitterShare to FacebookShare to Pinterest
Labels: match preview
Newer Post Older Post Home