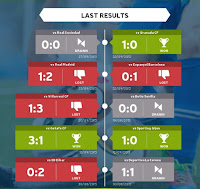 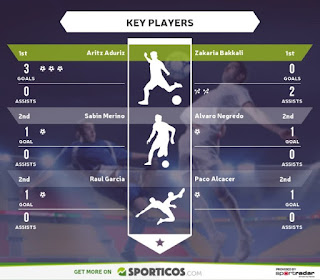 Valencia CF are up against the always tricky opponent Athletico Bilbao and these two teams have been rivals in the past several seasons as both teams have fought over those top 4 positions that lead to the Champions league.

Athletic Bilbao have done okay in the past few years, looking at it historically they've technically been improving in modern history, getting higher and higher finishes on the table in the last 7-8 years, culminating in a Champions league position once, but that has been their highlight and they haven't stepped up from that.

They've also sold a couple of key players the past two seasons, so any sort of momentum they've had before has definitely been stopped and you could see it this season as they are struggling to get any results and are struggling at 18th position on the table with only 5 goals scored and 9 conceded goals.

Former Valencia CF player Artiz Aduriz has been a key player for Athletic Bilbao ever since he joined them, instantly becoming a crucial part of their team and scoring a lot of goals for them, in fact he has been their top goalscorer for three seasons now, after replacing Fernando Llorente. 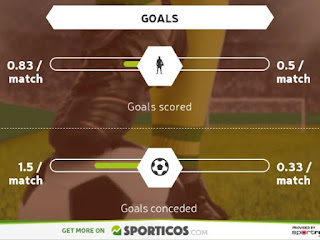 Another key player for Athletic Bilbao is Markel Susaeta who's been their top assistor the last several seasons in a row, while their overall play has been to control the midfield and then with mixed passing get the ball to Aduriz who can score through headers and just the standard poacher way.

Valencia CF play has been slowly improving over the last couple of matches, it hasn't been any sort of significant improvement of any kind, but just slight improvements like making less mistakes in passing, less individual mistakes in midfield and defense and just try and play more cohesively overall.

Daniel Parejo has been solid in that playmaking role, spreading the ball effectively and contributing a lot in defense, something that he's improved immensely at since his arrival at Valencia CF. Big blow to Valencia CF is the injury to Enzo Perez who will be out for few weeks with a muscle injury of some sort, but good news is that Andre Gomes is back yet again and is ready to be included in the starting eleven, in fact judging from the training sessions its going to be Fuego, Parejo and Gomes in the midfield.

In attack its most likely going to be Paco Alcacer who didn't play against FC Lyon, though Nuno has been sticking with Negredo a lot, even though I don't think he's warranted it that much, so who knows, I wouldn't be surprised to see Negredo again, but most likely its going to be Paco. Feghouli has been having great games this season and I think he'll definitely start, unless he has bigger issues with fatigue, since he's been playing without long rest for a while now, but I think he is going to start, he usually has good stamina.
Since we are back in La Liga I think he is going to start Bakkali, the player has warranted his inclusion and has done well so far for us, so I think he is going to get the nod over Piatti.

Result Prediction:
Athletic Bilbao 1-1 Valencia CF
I know Athletic Bilbao are in bad form and they haven't look good on either end, they haven't scored a lot of goals and have conceded their fair share, but they've always been a tricky opponent for Valencia CF and they tend to play better against tougher opposition, so I'm sure they'll be much improved against Valencia CF and I expect a close match with both teams having several chances to score and each of them scoring once, with the ultimate result ending in a 1-1 draw.
Posted by SlickR at 3:19 AM
Email ThisBlogThis!Share to TwitterShare to FacebookShare to Pinterest
Labels: match preview
Newer Post Older Post Home