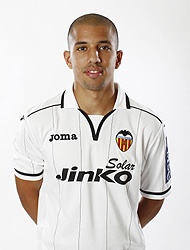 Arsenal FC are monitoring Sofiange Feghouli closely, it seems as Arsene Wenger is a fan of the player and would like to reinforce his squad in the winter transfer window and add some depth to it as well in order to fight on 4 fronts this season and continue the challenge for the premier league title.

Sofiange Feghouli has had a great season so far, he's been one of the best players for Valencia CF and with his contract expiring soon and no new deal signed yet, several clubs have begun inquiring about the player.

While back there were reports than FC Barcelona and Inter are also interested in him, as well as few other English clubs. Most English teams are very rich, since their league TV money is spread rather equally and they got one of the biggest money deals this year, so they have a lot of money to purchase players and give them big salaries.
Posted by SlickR at 11:25 AM
Email ThisBlogThis!Share to TwitterShare to FacebookShare to Pinterest
Labels: transfer speculations
Newer Post Older Post Home