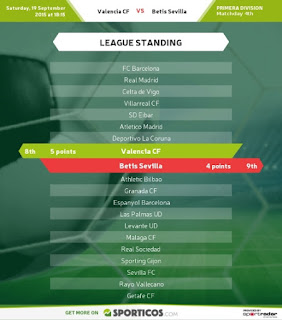 Valencia CF is changing its attention to the Spanish league, after a disappointing loss in the Champions league at the legs of FC Zenit. I'm sure the loss feels even worse considering the team played well, controlled the match and even equalized, but only to concede again and ultimately lose 3-2.

Real Betis have returned to the 1st division in the Spanish league after spending several years in the second division. They are strengthened this season by the arrival of Joaquin Sanchez from Fiorentina, who also in his time played for Valencia CF, before being sold to Malaga several years back. 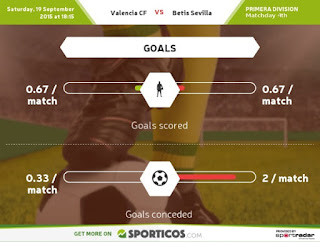 Another recognizable name is Rafael van der Vart who joined them this season from Hamburger SV on a free transfer.

Overall they've had quite a number of changes to their squad, with couple dozen of players arriving and leaving their squad. Judging from their past 3 matches they are an okay team, certainly likely to be fighting to avoid relegation, I don't see them finishing in the middle of the table, but anything is certainly possible.

As far as Valencia CF is concerned the team will be looking to win this match, anything else will be a major, major disappointment. This is a must win match, especially at home in the Mestalla. Nuno Santo talked at the press conference that he wants the team to be more solid defensively and that apart from winning tomorrow he expects the team to keep a clean sheet. Great objectives, lets see if the team can achieve them.

With the team only having few days rest after the Champions league match its most likely that Valencia CF coach Nuno Santo will give some of the reserve players some playing time and change up the team considerably from the previous match. The only thing that will likely stay the same will be the central defense of Mustafi and Aymen, since Nuno would like them to gel nicely so that the team is better defensively.

Match Result:
Valencia CF 3-0 Real Betis
All of the matches this season have been won through the grinding of the teeth, Valencia CF haven't had any match that they've comfortably won, in fact apart from the win at the Mestalla against AS Monaco and the last minute win against Sporting Gijon the team hasn't had many win at all.

So I'm expecting to finally see a good result, I'm finally expecting a comfortable win and if we don't get it I'll be seriously questioning the strength of the team. At the very least VCF should be able to win 2-0 against Real Betis.
Posted by SlickR at 4:03 AM
Email ThisBlogThis!Share to TwitterShare to FacebookShare to Pinterest
Labels: match preview
Newer Post Older Post Home