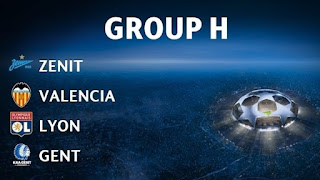 After a hard fought victory over Sporting Gijon in the Spanish league, all thanks to a last minute goal by Paco Alcacer, Valencia CF turns its sights over to the Champions league where it will face last season's Russian Premier league champions FC Zenit in the first fixture of group H.

Even though FC Zenit are last season's champions they haven't had the best start to the new season, currently sharing 3rd place on the table with 16 points, 6 points bellow leader CSKA Moscow. More worryingly is that their coach Andre Villas-Boas has announced that he will step down as coach of Zenit St Petersburg at the end of the 2015-16 season. Villas-Boas had previously hinted at a possible exit from Zenit, saying last week that he wanted to leave the club at the end of last season but management would not allow him to go.

Clearly he wasn't happy at the club and wanted to leave, but he's been forced to stay through his contract and surely this must be affecting his work, so it would be interesting to see how they cope in the Champions league.

Valencia CF qualified for the Champions league group stages by beating AS Monaco, who were one of the toughest opponents possible, but with some good play, some luck and AS Monaco selling some of their best players this summer Valencia CF managed to beat them and secure its position in the group stages.
On paper group H is one of the easiest groups, if Valencia CF were choosing their opponents they wouldn't have been able to pick better opponents, but having said that the team must take every opponent seriously and give 100% throughout the full matches in order to win. Taking opponents too lightly or thinking we are already to the last 16 would be a huge mistake and in the Champions league anything can happen and each of the teams have earned their place there.

I'm sure the team is taking FC Zenit seriously though, since its not like they've been winning with ease in La Liga, the team must prove that they are good, that they have enough quality to get through this group and the first step is winning at the Mestalla against FC Zenit. This match is absolutely crucial and securing 3 points would pave the way for us, give the players much needed confidence and moral boost that will enable us to take the upcoming Champions league matches more confidently.

Valencia CF coach Nuno Santo started a strong team against Sporting Gijon in the hopes of securing the first win in La Liga, and while a win was barely secured, that means he has tough choices to make tomorrow of whether to rest some of the players or not.

One option he has is to start De Paul in midfield, but he would have to start over Enzo Perez who also played last match, another option would be starting Moreno in place of Piatti and Paco Alcacer over Negredo. Javi Fuego is almost certain to play, since I don't think he'll risk playing the inexperienced Danilo, the defense would probably be the same, with the exception of Cancelo, who might be replaced by Barragan. It will also be interesting to see if he plays Andre Gomes in the starting eleven, he did well when coming on last match, but is he fully match fit and can he last 90 minutes?

Match Result:
Valencia CF 2-1 FC Zenit
Valencia CF haven't looked too comfortable at the back this season and while I'm sure Aymen will provide more stability once he establishes an understanding with the other defenders, this isn't going to happen overnight and will require some time, so I'm expecting Valencia CF to concede a goal, probably from set piece of some sort of chaotic situation in the penalty area, but I'm also expecting to score twice this match and win two to one.

I realize we haven't been scoring much at all, but I think the team can muster up two goals, especially if we are accurate in front of goal and take our chances. Last season Valencia CF had the most goals scored from the least chances, it wasn't that we were creating more chances, it was that we would create 3 chances and score from all three, this season Paco Alcacer has started a bit slower, as has Gaya who did provide the majority of assists and crosses this time last season.

So overall FC Zenit are a bit weaker than last season, their coach is clearly unhappy and wanted to leave before the start of the new season, so of course that is going to have an effect on their performances and Valencia CF should be good enough to be able to win at home against FC Zenit.
Posted by SlickR at 7:58 PM
Email ThisBlogThis!Share to TwitterShare to FacebookShare to Pinterest
Labels: match preview
Newer Post Older Post Home