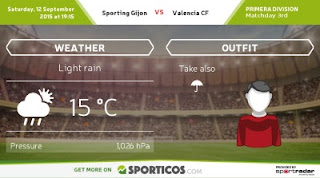 The international fixtures are over and we are back to club football again, with Valencia CF traveling to El Molinon in the 3rd round of the Spanish league.

I wrote an article how the international break would benefit Valencia CF and it time to find out if I was right or not, and not to brag, but I'm rarely wrong about those types of things.

We saw Paco Alcacer play for Spain, he had two relatively short cameos as a sub,  but he was lively in his time on the pitch and seemed way more likely to score than Diego Costa, in fact he did score, but unfortunately his goal was deemed offside. I think he'd be better off now, since I think he's got his competitive spirit back.

Shkodran Mustafi unfortunately did not feature for Germany, Aymen Abdennour and Jose Luis Gaya did feature for their respective national teams, with Gaya scoring a crucial goal for Spain U-21 squad and giving them the lead.

With the two week break, it has allowed Andre Gomes to recover from his injury and be fit enough to be featured in the squad against Sporting Gijon for the first time this season, after over 3 months of injury!

Anotnio Barragan is out of the squad due to his red card in the previous match, while Ruben Vezo isn't listed either, which as of now I'm thinking probably some small injury, this means that we'll see either Aymen Abdennour or Aderlan Santos featuring for the first time, after the late transfer market purchases to strengthen our defense. Judging from the training sessions Nuno is likely going to start with Aymen Abdennour and Shkodran Mustafi as the central duo.

With Mathew Ryan also injured for at least 1 more week, most likely two, we are going to see either Yoel or Jaume feature in front of goal, with Yoel probably going go get the spot.

There is a champions league game just 4 days later, so while I do think Nuno is going to play the strongest team since Valencia CF desperately need the 3 points, it will be interesting who exactly gets to feature and who is going to be saved for the Champions league match.

Match Result:
Sporting Gijon 0-2 Valencia CF
If I was a betting man I'd put my money on Valencia CF winning and I'm thinking probably 2-0 over Gijon, the team has had full two weeks to get ready, the new arrivals have had time to gel better, as I've said I think the international duty has benefited the team, the players and I expect Valencia CF to come out swinging from the first minute. I'm expecting an early goal, within 20 minutes at most and then comfortably winning by 2-0.
Posted by SlickR at 3:50 AM
Email ThisBlogThis!Share to TwitterShare to FacebookShare to Pinterest
Labels: match preview
Newer Post Older Post Home