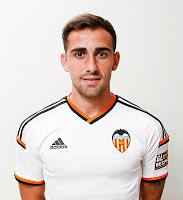 Shkodran Mustafi has been called up to the German national team, he's become a regular since the last World Cup, hopefully he can be more consistent for Germany and become a starter.

Andre Gomes has been dropped from the Portugal squad, but he's been injured for over 3 months, so its only natural he's been left out until he starts playing for Valencia CF and recovers his fitness and form.
Posted by SlickR at 11:02 PM
Email ThisBlogThis!Share to TwitterShare to FacebookShare to Pinterest
Labels: news
Newer Post Older Post Home