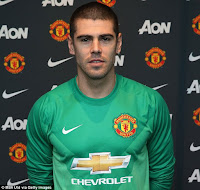 Victor Valdes agent has been seen in Spain and rumors have it that he met with Valencia CF staff in order to facilitate a possible move to Valencia CF. The veteran goalkeeper has been snubbed by Luis Van Gaal and left out of the squad that went on US tour, fueling speculations that the goalkeeper is on his way out.

Certainly the Manchester United coach seems set that he doesn't need Victor Valdes, so expect Valdes to leave the club, where he goes is another matter with few smaller clubs interested in him, a Turkish club interested in him and of course Valencia CF, but only on a loan deal.

Victor Valdes would want to stay at Manchester United, he is playing for one of the most powerful financial clubs in the world, has a big salary and its a club with long and rich history, but he just might be forced to leave if LVG doesn't count on him.
Posted by SlickR at 5:45 PM
Email ThisBlogThis!Share to TwitterShare to FacebookShare to Pinterest
Labels: news, transfer speculations
Newer Post Older Post Home