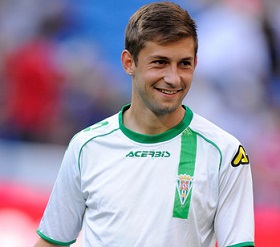 With Valencia CF looking to offload Fede Cartabia several clubs have shown interest to bring the player to their ranks either on a full transfer or a loan deal. Valencia CF would prefer to send him out on a loan deal once again, but Deportivo La Coruna is said to want to purchase the player, though with their financial situation being poor and Fede being valued at several million euros by Valencia CF its most likely that he will be sent on loan at this point.

Another interested club in him seems to be Las Palmas who would want to take him on a 1 year loan deal, its is now up to Valencia CF to decide what to do with the player. Nuno has all but confirmed he does not count of Fede for the next season as he has been frozen out of the squad traveling to China and with basically 3 different players that can play at right wing beside Fede, he is deemed surplus to requirements.
Posted by SlickR at 6:40 PM
Email ThisBlogThis!Share to TwitterShare to FacebookShare to Pinterest
Labels: news, transfer speculations
Newer Post Older Post Home