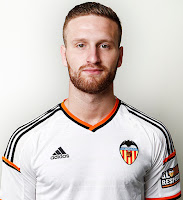 Shkodran Mustafi's agent has revealed that Real Madrid and Barcelona are interested in the player, but also insisted that his client is very happy at Valencia CF and isn't thinking about it.

Mustafi has impressed with his performances from last season and had formed a great defensive partnership with Nicolas Otamendi, so its no surprise that other top clubs are interested in the player!

"There has been an inquiry from Real Madrid," he told Bild. "But there have not been any further talks."
Posted by SlickR at 2:37 PM
Email ThisBlogThis!Share to TwitterShare to FacebookShare to Pinterest
Labels: news, transfer speculations
Newer Post Older Post Home