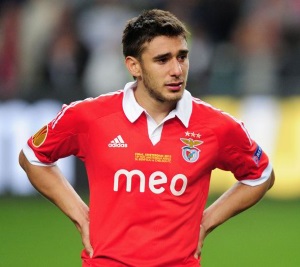 By now Valencia CF has been linked to pretty much every Benfica players there is, Valencia's owner Peter Lim purchased Rodrigo Moreno and Andre Gomes from Benfica before he took over Valencia CF and obviously used his ownership of these players as a bid for the club, Valencia CF then moved in for Joao Cancelo and got him on a loan deal and finally got Enzo Perez in the summer transfer window after trying to purchase him for over a year.

The club has been linked to several other Benfica players and the latest rumor is that Valencia CF is back at it and interested in Eduardo Salvio, Benfica's right winger. I think he has been linked with Valencia CF before, but at this point who can remember, so this is nothing new.

Does Valencia CF need an additional right winger? The answer is absolutely not, Feghouli is already having trouble breaking into the first team even though he is our only natural right winger, with Moreno and recently De Paul rotating on that right wing spot, and in the summer we'll get Fede Cartabia back from his loan deal at Cordoba and he's been playing amazingly at Cordoba, has definitely been their best player and he is operating as a right winger there from the few times I've watched their games.

So is there any merit to this rumor? Who knows, the club would be looking for different reinforcements in the summer and if the team qualifies for the Champions League they could spend over 50 million euros on new players, so its possible, but unlikely.

I think the club might want to get rid of Felipe Augusto who hasn't proven himself to be good enough for this team and possibly go for a world class defensive midfielder, someone that would compete directly with Javi Fuego and truth be told Fuego has been really good, doing his job at the back really well, but sometimes if you want to challenge for titles you need a player that is just as good in an offensive sense as well and can have a big impact in attack as well.
Posted by SlickR at 10:54 AM
Email ThisBlogThis!Share to TwitterShare to FacebookShare to Pinterest
Labels: news, transfer speculations
Newer Post Older Post Home