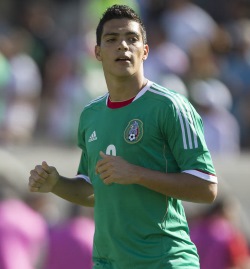 According to Mexican sources, Valencia CF have submitted a bid for 23 year old Mexican and Club de Futbol Amercia striker Raul Jimenez. This move comes as Valencia CF have been looking to reinforce the attack with someone who can compete with Paco Alcacer and Rodrigo. The bid seems to be in the region of 5-6 million euros.

Jimenez is one of the biggest prospects in the Mexican League and is being coveted by the likes of Porto and Benfica. These two Portuguese footballing giants have a great scouting system and if they're interested in this guy, he's going to be good. I've heard of the name a couple of times but don't have very much knowledge about the player but apparently he is a pure striker, he has great physical presence, really tall and good heading ability. Please share if you know more about the player.

Any thoughts? Is this more like it as a reinforcement for the offense?
Posted by Amunt.Valencia at 10:09 PM
Email ThisBlogThis!Share to TwitterShare to FacebookShare to Pinterest
Labels: news, transfer speculations
Newer Post Older Post Home