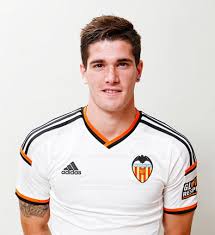 The Spanish FA committee has ruled that Rodrigo de Paul's penalty for his foul on Aleix Vidal in the game against Sevilla is a four game ban. Valencia CF is outraged by such a punishment calling it "disproportionate". The club is in the process of appealing the decision.

The committee has seen the action from de Paul as having a "violent" intent behind it. The referee of the game did include anything about violent intent in the report and the Aleix Vidal himself said that he didn't feel like de Paul had any intent, let alone a malicious one, in hitting him.

Honestly, I am really pissed out at this sanction. If they FA were being consistent I wouldn't mind much, but 4 matches really? Let me put this into more perspective. Here are some events that happened in the same La Liga week:

1. Cristiano Ronaldo pushes a player who was grappling him to the ground and hits him deliberately in his face -- not even a yellow card, no match ban.

2. Iniesta flails his arms almost identically as de Paul and knocks a player down -- yet again nothing

3. Elche attacker gets away and is clear to run straight at the keeper, Mascherano pulls him down -- red card and one match ban

4. Duda angrily pushes player to the floor during a stoppage of play, it was an off-the-ball incident -- red card and two match ban

5. Antunes can't catch up with a player so he slide tackles him from behind with no chance of getting the ball at all, it wasn't even close to his reach -- red card and one match ban

So what did de Paul do that deserved four matches? That's as much as all these incidents combined! Simply outrageous.