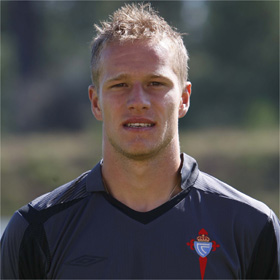 Celta de Vigo goalkeeper Yoel Rodríguez Oterino joins Valencia CF on a one year loan deal with the option for Valencia CF to purchase the player for 2.5 million euros at the end of the season.

This means that Vicente Guaita is close to leaving and I wouldn't be surprised if he moved to another club within 10 days.

The fact that he comes on a loan deal is a bit strange and I wonder if the situation is same as with Gomes and Rodrigo, since the club is planning permanent deals only once the club has been sold to Peter Lim, which now seems to be going a lot slower than initially thought.
Posted by SlickR at 4:20 AM
Email ThisBlogThis!Share to TwitterShare to FacebookShare to Pinterest
Labels: news, official transfers
Newer Post Older Post Home