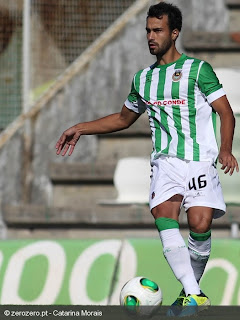 Valencia CF is planning a major reformation in defense this summer transfer window. With Mathieu strongly linked away from the club day after day, and Barcelona rumored to be willing to pay the full amount, it could now be a matter of time only. In addition both Victor Ruiz and Ricardo Costa are on the sales list of the club. Should those three be sold, then we will be left with new signing Otamendi and youngster Ruben Vezo. That's it. As such, the club is planning to reinvest the money from Mathieu into reinforcing the defense with two signings.

The one name suggested by Nuno was Marcelo dos Santos of Nuno's former club Rio Ave FC. He is a 24 (turning 25) year-old Brazilian right-sided center back (Mathieu is left-sided) who seems to have the trust of Nuno so much that he's willing to give him a chance at Valencia CF. While no price has been given yet, I think he would be available for very cheap considering Rio Ave FC is not that big and the player himself is willing to join.

I don't know who the other signing would be since there wasn't a second name given. However, I would like to give a chance to Tendillo of Mestalla B instead of someone from Rio Ave FC. If the coach has this much confidence in this guy, I hope he's worth it.

Any thoughts about Marcelo dos Santos or other defensive replacements?